While it has confirmed it will not be referring them to Health Minister Lesley Griffiths, North Wales health watchdog body the Community Health Council, says it has “very serious reservations” about the implementation of plans to close four community hospital across the region, including the one in Llangollen.

This revelation comes in a letter sent today (Monday) by the CHC to Ms Griffiths setting out its objections to the Betsi Cadwaladr University Health Board’s for a major shake-up of services.


This follows a public consultation and lengthy discussions as the CHC tried to get the health board to change some of its plans. The discussions finished late last week.
In its letter to the Minister the CHC says it has “already confirmed that it will not be referring the changes to four of the nineteen community hospitals in North Wales” to her.
However, the letter adds that it has “very serious reservations” about the transition and implementation plans for these community hospitals and asks Ms Griffiths to monitor this closely.
The CHC’s chief officer, Pat Billingham said: “Some aspects of the health board’s proposals are good. We have argued for a long time that more money has to go into community-based services.”
Mrs Billingham adds: “I know that many people are disappointed that the CHC did not object formally to the plans for closing some community hospitals.


“We looked at all the arguments very carefully and came to the decision that the promised investment in other types of primary and community health care service was very important and we could not pass that up.
“The health board has now given us much stronger commitments to providing the money, and only in the past few days. It would have been much better, of course, if new services were available before any closed.
“This is why we call on the Minister to make sure the health board does as it has promised – to make the changeover as quickly as possible.”
Plaid Cymru’s North Wales AM Llyr Gruffydd said: “The Community Health Council has raised many serious concerns about Betsi Cadwaladr’s plans to downgrade and centralise local health services.
“However, it failed to take the obvious step and formally object to the health minister. In effect it has abdicated its responsibility and emerges from this process badly damaged.
“It’s now up to the Health Minister. She must not abdicate responsibility in the same way.
“It’s clear from the multiple concerns raised in the CHC report that the plans are riddled with flaws and inconsistencies. Buried in the detail is news of new funding being found by the NHS Wales chief executive for new health centres.


“When was the business case submitted for such funding? The public needs to see full details of this new funding package rather than have it delivered after the end of the consultation process.
“The buck stops with the health minister. She must intervene and ensure community care is maintained locally and specialist neonatal services are kept in the North.”

North Wales Health Alliance said: “The CHC has blown huge holes in the health board’s proposals and it’s great that they have listened to our complaints and concerns.

"It’s regrettable that they haven’t felt able to formally object to some of the failings they highlight but it is now impossible for the health secretary Lesley Griffiths to wash her hands of this.

“Community hospitals have been closed before this consultation ended and must be re-opened immediately to maintain important community care.

"We remain unconvinced that the proposed replacement services are costed and want to see the details – it could be years before new health centres are built."

Below is the section of the CHC letter which refers to Llangollen ... 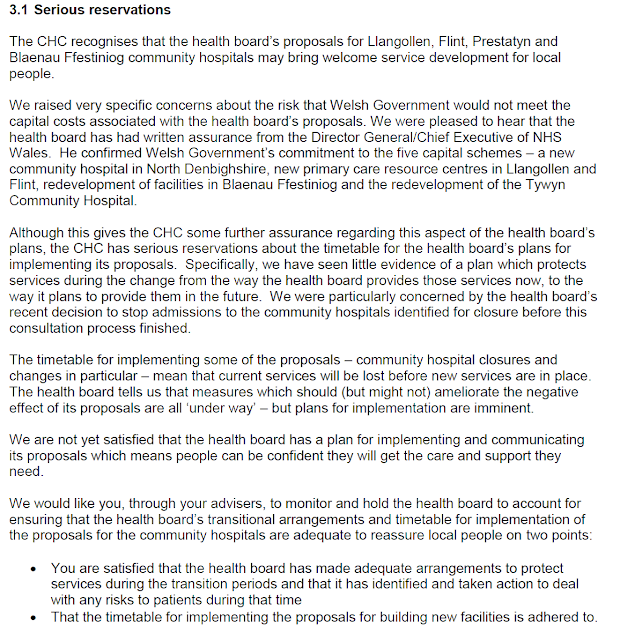 Posted by llanblogger at 7:07 PM