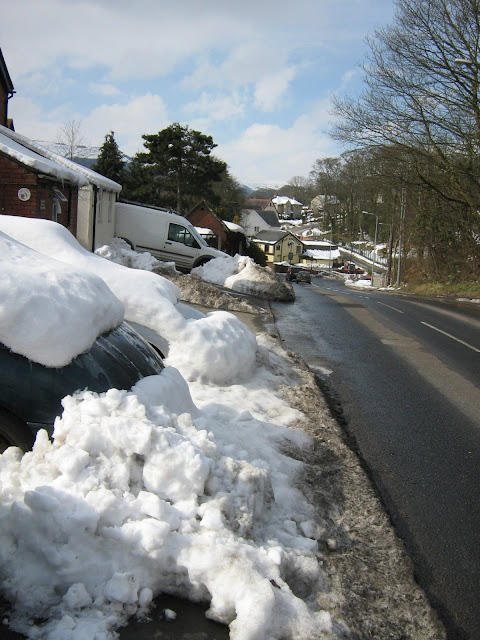 * Many of the pavements through Trevor are still blocked by snow.

A professional driver has highlighted what he claims are the dangerous road conditions left on the main through Trevor in the aftermath of last weekend’s heavy snowfall.


The man, who does not wish to be named, says he was heading home through the village on Saturday night when he almost hit a family forced to walk along the carriageway because the pavements on both sides were still blocked by snow
He said: “It was a father pushing a pram with other children walking alongside him near the Aussie Rooster pub.
“They were wearing dark clothing so I only spotted them at the very last minute and managed to steer around them.
“It was so lucky I didn’t hit them.
“It wasn’t their fault they were having to walk in the road. The pavements on either side were still completely blocked by deep snow so they had to make their way down the carriageway.”
The driver added: “The council in Denbighshire has done a great job clearing the roads and pavements in and around Llangollen but Trevor is the responsibility of Wrexham Council which obviously doesn’t consider making the pavements safe for pedestrians a priority.
“This is a very dangerous situation and Wrexham should do something about it before someone is hurt.”
Posted by llanblogger at 12:10 PM