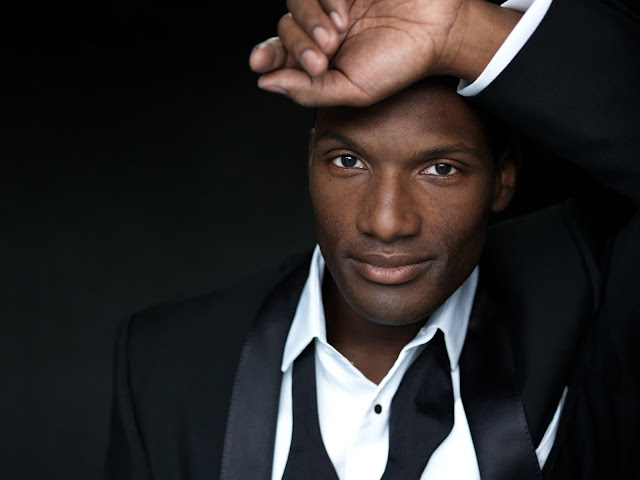 * Noah Stewart is to appear at the eisteddfod in July.

The first black musician to top the British classical music charts is following in the footsteps of one of his all-time heroes.

Top tenor Noah Stewart will be performing at the Llangollen International Music Eisteddfod where opera superstar Luciano Pavarotti launched himself on the world stage.

Noah, who was born to a single mum in Harlem, New York, arrived  on British shores a little over two years ago after been signed up to play the role of Lt B F Pinkerton in Puccini’s Madame Butterfly for Northern Opera.

Noah was fascinated to learn of Pavarotti’s love affair with the international festival of music and dance in the picturesque town of Llangollen.

When the chance came emulate the famous Italian tenor, he was determined to seize the opportunity with both hands.

He said: “I learnt that Pavarotti actually competed at Llangollen. My career has followed a similar path in many ways as, like Pavarotti, I too entered and won, a singing competition, although I was only 12.

“But it was how I started in music. It gave me the first clue that I might have a career doing what I love most, singing. There have been tough and difficult times getting to where I am today but in truth I suppose I haven’t done too badly for a black kid from Harlem.”

Noah is devoted to his single mother, Patricia, who fought hard to put food on the table and raise him and his sister, Belinda, the right way.

He said: “New York is the greatest city in the world as far as I am concerned and Harlem is such a special neighbourhood. I know Harlem has a reputation, undeserved, but there all the same, as being a tough desperately poor place where black people lived.

“But what people don’t realise is that Harlem has changed so much. In fact there are now more white people than blacks living in Harlem. It’s actually become quite a fashionable area in which to settle.

“But going back a few years Harlem was the centre of a kind of renaissance with many influential black musicians, writers and artists arriving from across America and Europe.”

Noah is fiercely protective of Harlem and its residents and says, growing up the area was, if anything, simply overflowing with love.

He said: “Don’t believe the hype that the district was nothing more than a crime-ridden ghetto. That just isn’t true; sure there are rough areas but you get rough areas anywhere.

“We never had a great deal of money but mum used to say being poor had nothing to do with how much money you did or didn’t have because you could be rich in love and knowledge.”

Noah was drawn to classical music as a child despite the fact that, being from New Orleans, his mum often played jazz, gospel and creole around the Stewart home.

He said: “I just found classical music different, it had a sort of richness to it and I always wanted to hear more. Sure, I played basketball, soccer and all the other stuff but mum didn’t want me out hanging around the streets at night so I listened to music instead.

“I really believe young people can lead better lives if they are exposed to the arts whether its poetry, literature, music, painting or some other form.

“The first time I actually listened to an opera, that was it, I was hooked. I just wanted to sing like that. Of course it was far more fashionable to aspire to be a pop singer but I knew that wasn’t for me. Others were better at that sort of music than me.

“I wanted to sing in Latin, Italian, French and German and I wanted to work on my voice, to set it free. In a way opera is like some sports such as archery or tennis, it’s about perfection and about being precise and accurate.

“Of course there were not many opera singers from Harlem and in a strange way that drew me to the art form, despite people telling me if I wanted to become rich then opera wasn’t the way forward. And they were right about that!

“But opera meant I could use the full range of my voice allowing me to explore and use its full colour. After I won the singing competition I enrolled in LaGuardia High School of Performing Arts and I used to watch recordings every day before classes started.

"During that time I sang back-up vocals for various pop acts such as Hootie and the Blowfish and Mariah Carey, all good experience."

Winning a scholarship to the Big Apple’s prestigious Juilliard School of Music was the next piece in Noah’s operatic jigsaw.

After graduating he took a year or so out taking odd jobs and even working as a receptionist at Carnegie Hall before winning a place on the Adler Programme at San Francisco Opera.

It was in California that he got his big break, singing the role of Macduff in Verdi’s Macbeth to rave reviews despite taking to the stage with just 15 minutes’ notice.

Since then Noah admits life has been something of a whirlwind as he’s travelled the world starring in operas and performing to ever growing audiences.

He said: “My biggest fan is my own mum. She retired not so long ago after 44 years working at the food store check-out. She gave up so much to help me along the musical path I’m on.

“I owe my career to her and everyone who has helped and inspired me, such as Luciano Pavarotti. And when I appear at Llangollen International Music Eistedffod I’ll be following in his footsteps and that really excites me.”


Noah will be performing in concert on Wednesday, July 10, with former Royal harpist Claire Jones and percussionist Evelyn Glennie.


Among the other stars t the International Eisteddfod this year, are Jools Holland’s Rhythm and Blues Orchestra, English soprano Claire Rutter, Kiwi bass Jonathan Lemalu and the choir Only Men Aloud who shot to fame on the hit TV show, Last Choir Standing.


To book tickets and for more details on this year’s event go to the website at www.international-eisteddfod.co.uk and on Facebook at www.facebook.com/llangollen

Posted by llanblogger at 9:10 AM