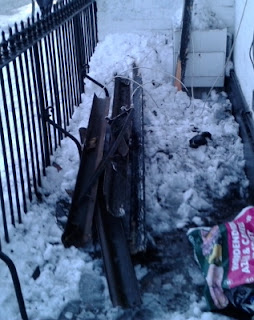 
Reports are coming in of damage to property all over town caused by tons of melting snow.


As a partial thaw set in llanblogger has been hearing of snow-laden trees crashing on to patios and carports and through the windows of parked cars.


Llanblogger’s own property in Regent Street was among those hit earlier this afternoon.


A huge area of melting snow slid down the roof of the house bringing over 20 feet of heavy cast-iron guttering (pictured right) crashing to the ground.


One of the heavy sections went straight through the rear of a car parked on the driveway at the side. It later had to be towed away for repairs.


The falling guttering, which came down along with a massive wooden faceboard, landed only feet away from where llanblogger editor Phil Robinson was out clearing away snow.


Out on the road, the A5 which had been closed between Llangollen and Corwen since Saturday, was finally re-opened at around 5pm today.


Meanwhile, Clwyd South MP Susan Elan Jones has written to ScottishPower’s headquarters in Glasgow to ask what the company is doing to help customers in her constituency through the current spell of arctic weather.


In her letter she says: “Following recent bad weather experienced within my constituency, I am writing to ascertain what action ScottishPower has taken in the Clwyd South area in order to help constituents through this difficult time.


“A number of constituents have reported blackouts to their power over the past week as a result of the extreme weather conditions that have hit North East Wales. Some have been left without power for a number of days.


“I would appreciate clarification of what has happened and any details on action taken by Scottish Power in order to combat the issues that my constituents have been experiencing. Furthermore, I would be grateful if you could provide details of the compensation package available to those who have been affected by the cuts in power and what can be expected by constituents who have been experiencing these problems.”
Posted by llanblogger at 6:50 PM