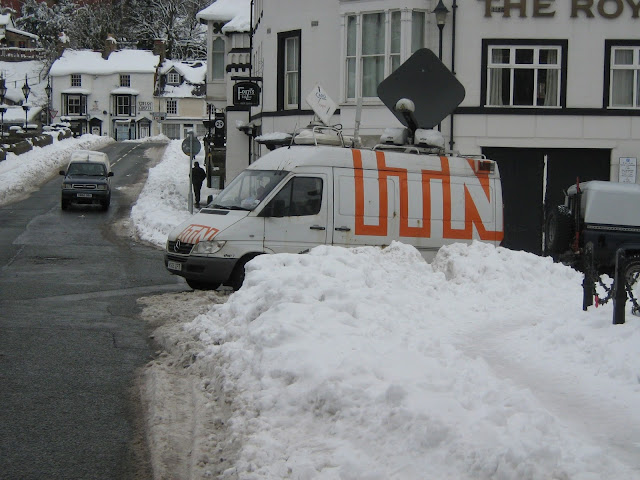 * The ITN film unit's van parked opposite the Royal Hotel this morning. 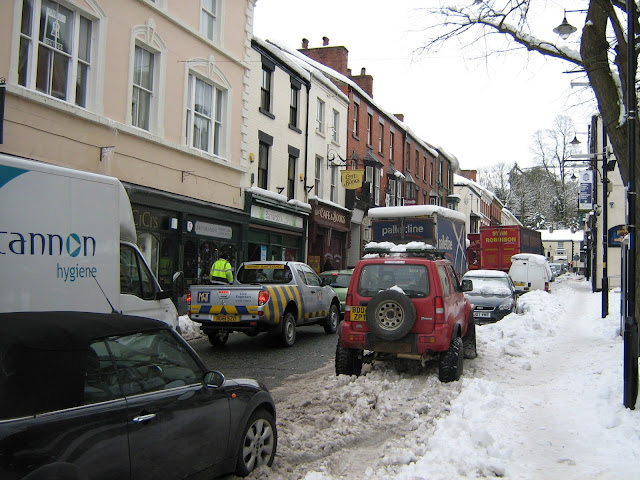 * Traffic queues up in Castle Street while lorries deliver to the shops.

A crew from ITN were in town this morning filming shots of Llangollen under its heavy layer of spring snow.

They beamed panoramic pictures of the bridge, Castle Street, the River Dee and the Methodist Church live into the Daybreak news magazine programme on ITV and later into the Lorraine show.

The crew arrived in a large white and orange van, complete with satellite dish on the roof, which was parked up opposite the Royal Hotel while the filming went ahead.

Speaking to llanblogger, the cameraman, who said he was based near Manchester, explained the crew was one of three outside broadcast units which had been despatched to Northern Ireland, Scotland and Wales to provide live footage of snow scenes for ITV.

Meanwhile, traffic jams developed in Castle Street and along the A5 in Regent Street as lorries had to park directly outside shops because they could not get into snow-bound side-streets or car parks as usual.

Pavements around town still buried under tons of snow were more treacherous than ever this morning after an overnight freeze left them coated with ice.

Traffic Wales reported earlier that the A5 between Llan and Corwen remained closed in both directions because of trees brought down by the snow lying across the carriageway.
Posted by llanblogger at 8:56 AM