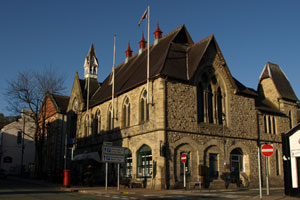 Fewer than 30 people attended the annual town meeting in Llangollen on Thursday evening.


But those who did show up at the Town Hall created a lively atmosphere of questions to the mayor, Cllr Jon Haddy, and debate.
Cllr Haddy, now in his second term as mayor, first gave a run-down on town council activity over the past year.
He described it as “an interesting one” which had seen some major changes for the council.
Last May had been the first time in a few years when an election for councillors had been necessary due to more people standing than there had been vacant places.
The current council would serve for five years rather than the previous four to come in line with five-year Parliaments, explained the mayor adding that “new blood” on the council always improved matters.
A new town clerk in the shape of Gareth Thomas had also taken up his post after replacing Ian Parry when he retired last June.
One of the main things done by the council during the year, explained the mayor, had been arranging to take over the town hall from Denbighshire County Council.
Cllr Haddy said he felt the county council had been “shirking” when it came to maintenance of the building and that the costs of its upkeep had been escalating.
“There was a very real chance this town hall would close and it was very sensible that after negotiations with the county council we took it back into our ownership,” he said, explaining that the building had originally been transferred into the ownership of the county council from the former urban district council as part of local government reorganisation in the 1970s.
However, he pointed out that “substantial sums” needed to be spent to bring it up to top condition.
Therefore, he said, the council’s principal objective was to “get someone else to pay for it”.
This, he revealed, could be achieved by the council retaining ownership while transferring the lease to a management company or a charity, while still ensuring the hall was run on its behalf.
The costs of hiring the town hall, said the mayor, would be changing “slightly” in April with some charges being increased while others would be reduced.
He explained that the cost of maintaining the town hall was currently met from the precept element of the council tax and rent income from the shops on Castle Street at the front of the building.
Cllr Haddy also outlined the need for volunteers to act as stewards during events held at the town hall.
The mayor then moved on to deal with other key events during the year, including the closure of the cottage hospital and the go-ahead for a new Sainsbury’s supermarket on the A5.
The hospital issue, he said, had “engendered a lot of local anger”.
He explained: “We did not oppose the closure but we made it clear that this should not be done until alternatives were in place.”
He added: “Personally, I believe that the health board have not behaved particularly honourably in this matter and haven’t done what they said they would do
“There seems to have been no logical and cogent argument why a 137-year-old building no longer exists.”


He said he had heard the Welsh Government had allocated over £20 million for a replacement health centre in Denbighshire, adding: “I am hopeful that something will be done but don’t hold your breath.”
On the supermarket issue, Cllr Haddy said: “As a council we were unable to object to it because of planning law,” but he added that he realised quite a few people in the town were “not very keen on the idea” although he realised opinion was split.
He said he had received unconfirmed reports that the new store may be completed by August of 2014.
Touching briefly on the preparation of a new Town Plan, the mayor said one of its facets was the bid for Llangollen to obtain Cittaslow status.
This, he explained, was a worldwide marketing organisation with quality of life and living at its heart.
The council had agreed in principle to join it and a working group under the chairmanship of Cllr Phil Thane was currently preparing to submit the official bid.

The mayor then dealt with the restoration of the Chain Bridge, which he said was a joint project between the town council and Llantysilio Community Council.
A first round application to the Heritage Lottery Fund had brought the cash to commission an engineer’s survey on the facelift and a further bid for the money to pay for the project had just been submitted to the same body, he said.
He added: “It is looking extremely hopeful. If we are successful work could start in late summer or early autumn. This will open up a complete new circular walk between the A5 and the wharf by the Chain Bridge Hotel.”
Cllr Haddy said the council was still in the process of developing the Royal Gardens after acquiring them from the Royal Hotel last year.
The aim, he said, was to make them a pleasant place to sit and meet people.
Grant aid was now being sought to take the facelift project forward.
The mayor added: “By next year it will either be under way or completed.”
After delivering his report on the past year, he invited questions from the floor.

One of the first questioners asked what the town council could do to deal with the derelict River Lodge and the empty Upper Dee Mill opposite on one of the main approaches to the town.
The mayor replied the council was aware of this problem and had “made noises” about it in the appropriate places. However, there was nothing directly it could do as River Lodge was owned by the Welsh Government and the mill by a private developer.
In another question, the mayor was asked for more detail on the Royal Garden facelift plan as there was some concern expressed from the floor about what affect this would have on the adjacent war memorial.
He replied that the two areas were being treated quite separately, with plans being in hand to lay York stone flooring in the flat area around the memorial.
Next question came from County Councillor Stuart Davies who challenged the amount of money being spent by the council on the town hall and a CCTV system which did not seem to be working properly.

Cllr Haddy replied that the cost of maintaining the town hall was equivalent to £5 per local household a year.
He added that the council gave value for money and that if anyone thought differently they were quite able to challenge it.
There were further questions on town hall repairs, the Royal Gardens project financing, the poor state of the canal towpath between Llangollen Wharf and the concreted area, and problems with local police response.
Members of the audience asked why no police representative was present at the meeting.
The mayor responded that the meeting was intended solely to deal with town council matters, but he added that policing of the area had improved dramatically over the past 12 months.
Another question from the floor dealt with the Christmas lights, with the questioner saying: “What we have now is not good enough.”
Cllr Haddy replied that the council would perhaps consider fresh options for the lights arrangement at the end of the three-year arrangement into which it had entered with contractors.
A written question submitted by local campaigner Martin Crumpton asked whether the council would consider setting up a committee exploring its own openness and looking into broadcasting its meetings via Skype or interactive websites.
Cllr Haddy responded: “We are already as open as any organisation can be.”
He added that the council published its minutes on its own website or noticeboard and members of the public were entitled to attend its monthly meetings.
If people disagreed with what the council did there were plenty of opportunities for monitoring its activities, he pointed out.
He revealed the council was currently planning to expand its website to make it “more useful” but, although admitting it was technically possible, ruled out the possibility of Skypeing or the online transmission of meetings, partly on the basis of cost.
One of the final questions from the floor dealt with what the council was doing to attract more visitors into the town.
Cllr Haddy replied there had been a suggestion from the county council that the town council takes over the running of the Tuesday market.
He said: “This is something we will consider because when you have a busy market you have a busy town.”
The meeting closed at around 8.45pm with the mayor thanking people for their attendance.
Posted by llanblogger at 8:59 AM