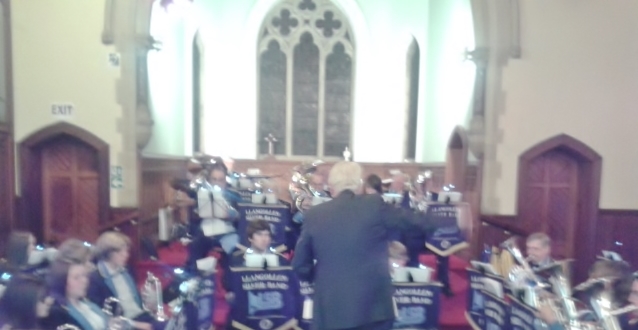 
An entranced audience were wafted away on a musical tour which took them from Hollywood to France and from London’s West End to Russia on Saturday evening.
And, thanks to Llangollen Silver band, they managed it all without leaving the comfort of the English Methodist Church in Princess Street.
The band, under the experienced baton of conductor Trevor Williams and comprising a large number of talented young players, laid on a highly enjoyable concert as the prelude to its 2013 playing season.
A varied programme included pieces ranging from the plaintive Just One Look, made famous in Andrew Lloyd Webber’s Sunset Boulevard, to the joyful theme from a 1960s Dubonnet TV advert based on a folk tune from the Auvergne in France.
Nobody can complaint that the band doesn’t offer a diverse repertoire.
And that diversity was further displayed when the musicians, a number of the younger ones fresh from taking part in band competitions earlier in the day, steered us off on further adventures.
These took in a stop on the dirty streets of London to hear Memories, a number from Lloyd Webber’s Cats, and then in Russia, home country of  Aram Khachacturian who composed the adagio from the ballet Spartacus – better known as the powerful theme tune from the 1970s TV series the Onedin Line – which the band delivered complete with musical evocations of flapping sails and mountainous seas.
The band’s motto is “music at the heart of the community” and that is exactly what it intends to go on providing this year.


At the end of the concert Trevor Williams said its busy summer programme would begin in early June with a “party in the park” style concert at Plas Newydd and continue locally with further sessions played from the bandstand in Riverside Park.
Posted by llanblogger at 7:42 AM