New breast cancer scan could save lives says AM

The Welsh Government is being urged to adopt a new breast cancer scan that could save dozens of lives according to health experts. 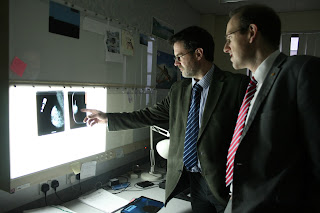 Llyr Gruffydd, Plaid Cymru’s regional AM for North Wales (pictured right being shown the screening process) made his plea during a debate he had organised on tackling breast cancer among women under 50 years of age.

He told the Assembly: “Breast Test Wales do a great job of screening women over 50 years of age, when the risk of cancer rises. There are also mammograms available for under 50s but it is not an effective form of screening.

“However, cancer specialists and the National Institute of Clinical Excellence have established that there is a group of younger women with genetic or family history that make them more pre-disposed to breast cancer.

“The best way, it is felt by experts, to deal with this small but specific group is to offer MRI screening. This has been NICE’s case for the past seven years and it’s about time the Welsh Government adopted this guideline.

“A thorough pilot has taken place in the North to establish that this kind of programme can work and it’s estimated that it would only cost about £500,000 a year to screen hundreds of identified at-risk women. These are hard economic times but it’s impossible to put a price on anyone’s life when it’s possible to deal with this so promptly.”


Dr Murray said: “I believe that MRI screening should be available for young women at high risk of developing breast cancer, as one of a range of options for managing their risk.
“At the moment these women have to choose between mammography, which is less effective in young women with a genetic risk, and bilateral risk-reducing mastectomies. MRI screening has been shown to be effective in this group and it offers them a realistic alternative to surgery.
“Not every young woman with a high genetic risk will want MRI screening but it should be available for those that do.”
Anybody wishing to join Llyr Gruffydd’s campaign can contact him onllyr.gruffydd@wales.gov.uk or sign the petitionhttp://bit.ly/UQQCiF
Posted by llanblogger at 7:59 AM