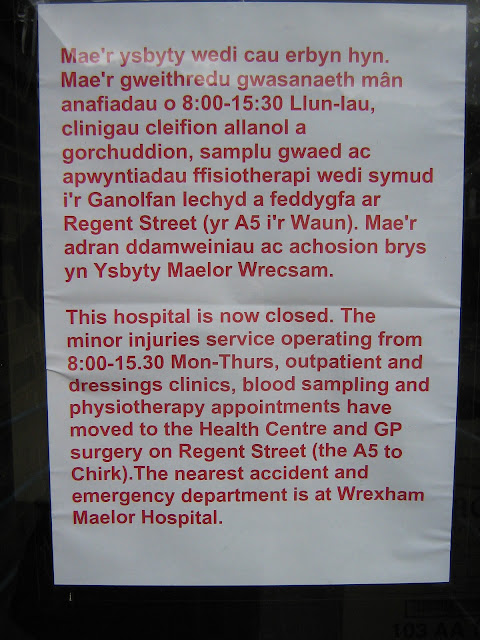 * The hospital is now closed, as this notice on the door shows, but
campaigners say the fight to retain local health services continues.

The fight to save Llangollen Cottage Hospital may be lost but the battle to retain high quality health services in the area has only just begun.


That is the message from members of a campaign group aiming to force the Betsi Cadwaladr University Health Board (BCUHB), which took the controversial decision to axe the hospital, to honour its commitment to provide a new purpose-built health centre in the town as quickly as possible.
Keep Lllangollen Health Services is also planning to seek a judicial review of the process which led to the closure of the hospital after 137 years of serving the community.
The group needs hundreds of pounds to finance the legal challenge and is currently working on a number of fundraising ideas.
The hospital on Abbey Road closed its doors for the final time the weekend before last with all the services it had provided, including outpatient and dressing clinics, blood sampling and physiotherapy, being transferred to Llangollen Health Centre on nearby Regent Street.

But the campaigners doubt the already busy surgery’s long-term ability to cope with providing the extra services and want a firm commitment from BCUHB to a permanent replacement as it promised during last year’s closure consultation exercise.

Key members of the group, which is affiliated to the campaign alliance set up recently to fight controversial health shake-up proposals across the region, met at the Hand Hotel in Llangollen on Thursday night to discuss the next moves in their campaign.

These will include a public meeting at the hotel on Tuesday, March 26, when members of the public will be sounded out on precisely what health services they would like to see included in a new health centre.

Group spokesman Mabon Ap Gwynfor said: “The fight to prevent the closure of the hospital may have been lost but the message we want to get over as strongly as possible is that the battle to hold the health board to its promise to provide a new health centre has only just begun.

“Our main objective now is to get a new health centre in Llangollen as quickly as possible with beds included. These are vitally needed because there was always 98 per cent bed occupancy in the cottage hospital.

“We plan to hold a public meeting at the Hand Hotel in Llangollen on March 26, starting at 7pm, when we will seek the views of local people on exactly what services they would like to see provided in the new health centre.”

He added: “We are also working towards a judicial review of the process leading to the closure of the hospital, which we believe was flawed.

“We are taking on a barrister for this but it will be expensive.

“We need at least £500 at this stage and we have therefore launched an appeal to raise as much money as we can.

“If anyone wishes to contribute I can supply further details if they e-mail me at keepllanhealthservices@gmail.com.”

Donations are also been accepted at Gwyn the Butcher, Mr Lees Newsagents and the Café/Bookshop.
Posted by llanblogger at 9:06 AM