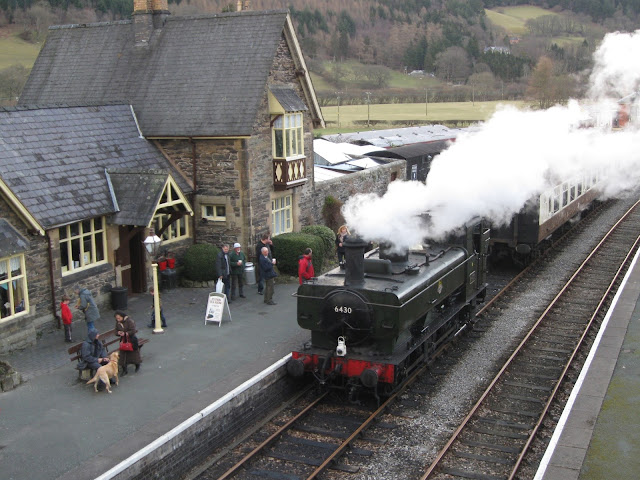 * Llangollen Railway is steaming into an exciting 2013 season.


Last  weekend’s long-awaited return of trains to Carrog for the first time since Christmas marked the start of an exciting new season at Llangollen Railway.


A varied programme is lined up to take the heritage line through spring and summer and into the autumn.


It powers up next Saturday (March 23) when two locomotives from the Llangollen-based fleet of diesels will offer an hourly service through the Dee Valley.


These Class 26 and Class 37 locomotives will demonstrate how the line might have been operated by British Railway had it not been closed by Dr Beeching's infamous axing of the Ruabon-Barmouth route in 1965.


A daily service begins from Monday (March 25) and continues through to early October, with three trains per weekday departing Llangollen at 11am, 1pm and 3pm.


A range of special events will be held throughout the 2013 season, with the popular Real Ale trains, Murder Mystery evenings and Days Out With Thomas all featuring several times in the railway's timetable.


First major event for steam fans will be the Spring Steam Gala on April 19-21 when the highlight will be the return of the Great Western Steam Railmotor No.93.


It will be joined with its newly refurbished trailer coach No.92, another example of the valuable restoration work undertaken by the skilled specialist workforce at Llangollen Railway.


George Jones, for Llangollen Railway, said: "Our volunteers and staff will again be working hard throughout 2013 to provide train operations and station facilities at what is one of the premier heritage attractions for visitors to North East Wales.


“A programme of events of some variety is scheduled to attract young and old to the railway to travel through the delights of the Area of Outstanding Natural Beauty which is now extended to include the Dee Valley."


Further details can be found at the Llangollen Railway's website: http://www.llangollen-railway.co.uk/
Posted by llanblogger at 7:52 AM