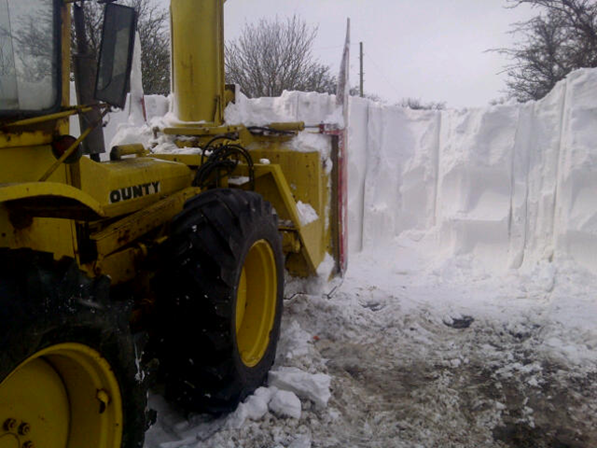 * A snow blower in action on a minor county road.

Work to clear the snow is continuing today and good progress is now being made on the smaller roads but many of these are blocked from hedge to hedge.

In some areas though, drifts are still reforming over roads that have been cleared and so access is with 4x4s only - it is still a constantly shifting picture at the moment. Every available resource is being used and 30 highways crews and contractors will be working into the Easter weekend to continue the clearance work.

Teams of staff have been deployed to clear the town centres at Llangollen and Corwen in time for the Easter weekend and good progress is being made here too.

There are concerns however, that there is a large amount of snow on the roofs that could come down at any minute posing a risk to anyone underneath so extra care is needed in these areas (some sections of the streets have been cordoned off to protect the public). There is also a risk to fittings such as guttering.
The council is reminding people with any immediate and urgent welfare issues to contact Denbighshire's Customer Service Centre on 01824 706100 (Welsh) or 01824 706101 (English).

The council has have been receiving help from other organisations such as British Red Cross to assist people who are still snowbound.
Posted by llanblogger at 5:14 PM