Update at 1.46pm
* A diesel day event planned for Llangollen Railway tomorrow (Saturday) has been cancelled due to the snow, according to railway spokesman George Jones.
He said: "For once the snow has beaten even the heritage railway, but we have to be aware of the difficulties our staff and would-be passengers might face in getting to Llangollen and other stations on the Dee Valley line." 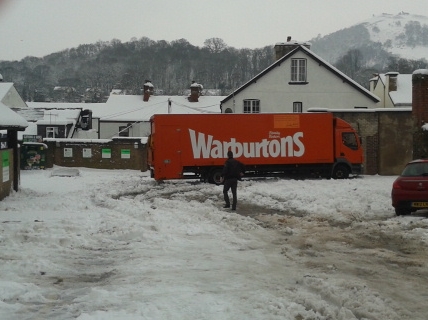 Patients traveling to Wrexham Maelor Hospital: all outpatient appointments have been cancelled due to difficulties with transport.

Arriva is operating normally from Rhyl west along the coast and south to Denbigh. The service 11 group from Rhyl and Prestatyn towards Holywell, Flint and Chester is currently terminating at Greenfield only.

GHA is operating normally between Ruthin, Denbigh and Rhyl only.

I have no up-to-date information on the services along the A5 (X94, 5). My understanding is that neither of these services are operating. If they are running, expect considerable delays on the A5.


As expected the snow moved in last night with strong winds and severe
drifting. There are reports of up to 25 cms of level snow in some parts of
the county with deep drifts in many places.

Crews have been out all night and will continue throughout the day. One of the main problems is fallen
trees and the Council arranged for contractors  to be out since 4 am trying to clear these.
Additional contractors have now also been deployed.

Many minor roads are impassable but the Council has deployed the agricultural
contractors to clear these.

At the moment the crews in the south are concentrating on keeping the A
roads open as conditions are particularly difficult on the A494 at the
Clwyd Gate and along the A525 between Ruthin and Wrexham. Crews in the
north are working on Rhuallt hill on the A55 and in the Tremeirchion area
where conditions are again relatively bad.

The public should take every care this morning as the drifting nature of the snow.  It is also very wet snow so it is bringing down a lot
of trees with it which are an added hazard.

Llangollen Library is closed due to the weather.

A number of Denbighshire schools are closed due to heavy snow affecting the region.


The Council is urging people to be extremely cautious on the county's roads and to continue monitoring weather and news bulletins for the latest information on the weather situation. Further heavy snow is forecast during the day.


A lorry has gone over on the Wrexham by pass,huge traffic jams. cars abandoned on B&Q roundabout due to snow

WEATHER UPDATE 8.50am- WREXHAM #snow NO WREXHAM SERVICES WILL OPERATE FOR THE REST OF THE DAY AS THE DEPOT HAS BEEN CLOSED.

GHA coaches said it was unable to operate its services in Wrexham and Denbighshire due to the weather.

There are currently 59 school(s) closed or partially closed within Wrexham County Borough.

These include Acrefair CP School

Posted by llanblogger at 8:39 AM