Anti-bollards campaigner hits back with his own statement 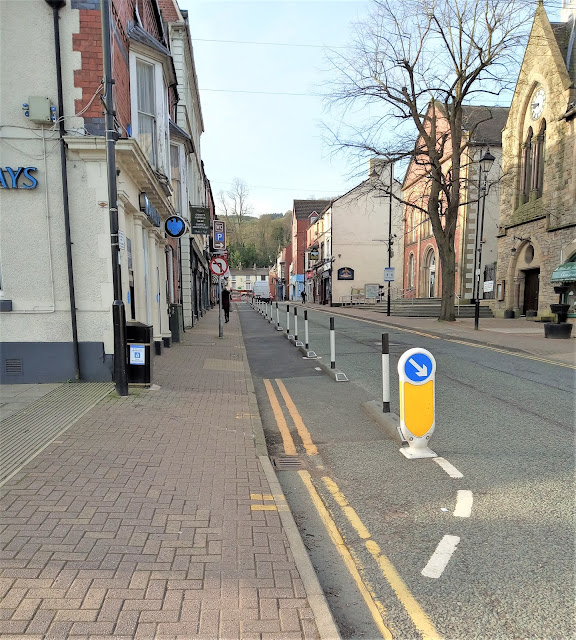 * The controversial bollards along one side of Castle Street.

Town councillor Stuart Davies, who organised the 500-signature calling for the controversial Castle Street bollards to be removed, has replied to yesterday's statement from County Councillors Graham Timms and Melvyn Mile explaining that they were to be taken away in the next few weeks and replaced with specially-designed planters.

Cllr Davies says: "I am pleased to see that the two county cllrs finally accept the fact that the bollard scheme that has been causing concern, with reports of trips and falls coming in since its inception, is harming people and needs to removed.

"The statement that the council is 'making the area as safe as possible' is an indication that the scheme is recognised as unsafe.

"My report to Denbighshire County Council of my own personal experience of a near-miss on the bollards over a month ago was not replied to by the Head of Service for Public Protection who is in charge of this scheme.

"The question has to be asked: Why it has taken so long for the reality to be addressed whilst in that time a person has been badly injured?

"The proposed new measures of leaving the bollards in place for four weeks and painting white lines as a means of control are still putting people in harm's way and the councillors seem desperate to keep this scheme in place at any cost.

"Cllr Timms advised Llanblogger in November 2020: 'Unfortunately there are strict rules about this - it’s about safety for pedestrians. Planters would be dangerous if a vehicle collides with them as they would slide, possibly causing injury,' and yet today he is saying: 'The first one is to use specially designed planters instead of the current lane defenders along Castle Street.'

"Research shows that the bollards are cycle lane defenders not pedestrian barriers and it is believed that this is why people have been tripping over the bases of them.

"We are fast approaching one of the busiest weekends of the year. There will be thousands of visitors arriving, the trip hazard will still be there.