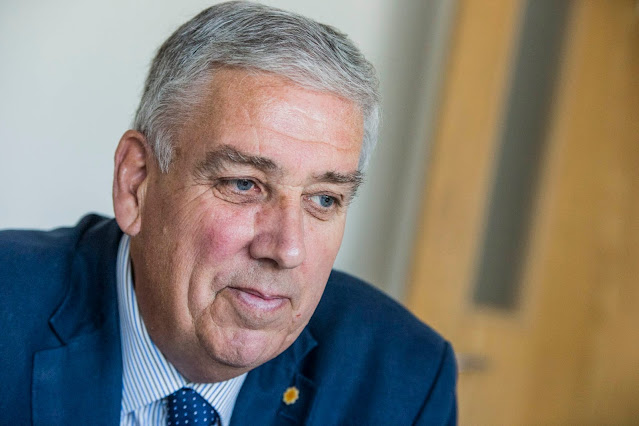 A police boss and two abuse charities are urging men in North Wales to do more to help women feel safe in the wake of the abduction and murder of Sarah Everard.

North Wales Police and Crime Commissioner Arfon Jones, the Domestic Abuse Safety Unit North Wales and the Rape and Sexual Abuse Support Centre (RASASC) North Wales were frustrated the onus appeared to be on women to keep themselves safe rather than men changing their behaviour.

The  disappearance of 33-year-old Sarah while walking home in London became national news followed by millions and it highlighted the dangers women can face when they are out alone.

Sarah’s body was found in a Kent woodland and serving Metropolitan Police officer Wayne Couzens, 48, has been charged with her murder.

Mr Jones, a former police inspector, said women had posted helpful tips on social media, most of which were small gestures that could make a big difference to how safe women feel walking alone at night.

According to the commissioner, there were several key points that recurred in the replies which he wanted to share with men in North Wales.

Mr Jones said: “As the Police and Crime Commissioner for North Wales, I work tirelessly to ensure that North Wales Police and its partners effectively tackles all violence against women and that perpetrators are brought to justice. We do not, and will not, tolerate such behaviour in North Wales.

“Women are not  attacked because they park in the wrong place, or because they aren’t paying attention to their surroundings when out in public.

“Women get attacked because men attack them.

“Sarah's disappearance has rightly prompted people to think how men can help women to feel safer on the streets, especially at night time.

“Many women have taken to social media to explain what men can do to make women feel safer when they’re out on their own.

“This list is by no means exhaustive, but it’s based on the real experiences of multiple women.”

When walking behind a girl or woman at night, remember that the closer you are, the more threatening you seem. So make sure to leave a good amount of distance between yourself and her.”

Alert women to their presence – but not by engaging in conversation

Approaching a woman in silence can provoke fear and panic. If you’re behind a woman and she cannot see you, try to make some noise to let them know you aren’t sneaking up behind them – call a friend, jingle keys – basically make any noise to draw attention to yourself

A stranger wouldn’t appreciate an offer from an unknown man to walk her home. But a friend might. Whilst you might think a route is safe or it’s only a short walk, having a male presence is sadly a valuable tool in warding off unwanted attention.

Talk to other men

Whilst staying away from women and being helpful to your female friends is all well and good, violence towards and harassment of women is a problem that is ingrained in our society. The true solution is changing the way that men treat women – and this means calling out your friends and other men when they’re crossing the line. If you want to make a true and meaningful change, bring up the fact that 97 per cent of young women have experience sexual harassment next time you’re with your male friends. The resulting conversation might surprise you.

Don’t run up from behind

Having someone run up behind you at night can give anyone a fright, but for a girl or woman it can be terrifying. Next time you’re out for an evening jog and see a woman walking ahead… cross the road or make sure to leave a good amount of space while passing.

If you’re by yourself, being stared at is intimidating and unsettling. Taking out your phone and focusing on something else can go a long way to showing you’re not a threat. Look out the window to focus on something else, or call a friend to have a chat.

Keep comments to yourself

What you might see as just a bit of fun, or even flattering, is actually harassment and can be terrifying to lone women and girls.”

Keep your mates in line

You may not harass women, but if you stay quiet while your mates do then you’re part of the problem.

Be an active bystander

If you notice a woman is uncomfortable with someone’s behaviour, show your support by being an active bystander. It can be as simple as standing between a woman and her harasser to block their line of sight. Ask her if she is OK, and back up anyone else who is intervening

Gaynor Mckeown, chief executive of DASU North Wales, said:: “We work closely with the Office of the Police and Crime Commissioner and North Wales Police to support and offer advice to women who may be subject of harassment or abuse.

“We welcome the commissioner’s  comments on the need to establish that it is every women's right to walk safely in our streets, at whatever time she chooses wearing exactly what she wishes.

“Women do not ask to be harassed, stalked or assaulted and we have a collective responsibility to hold perpetrators of such abuse to account.

“It is not acceptable to make comments, follow either on foot or in a vehicle, beep at, call to or whistle at women or girls.

“As a mother of two teenage daughters who are regularly made uncomfortable and scared by this type of behaviour. We need to educate our sons, friends, colleagues and others who do this, explaining that it is not acceptable it is not appropriate, and it causes fear, and distress."

RASASC operations manager Fflur Emlyn said: “Women have a right to not only feel safe but BE safe – in public, at home, at work – everywhere.

“Sarah Everard was walking home, everyone of us can identify with this horrific incident, it could’ve been anyone of us: 97% of women in Britain have been sexually harassed at some point during their lives.

“We welcome the Police and Crime Commissioners statement and advice, women are not to blame for being attacked and/or assaulted.  There is and should be no shame, blame or guilt for any women who has been attacked/assaulted, it is always the perpetrators fault.

“Let’s talk about this, educate your male friends and family members and don’t be a bystander, all of us in society has a responsibility to hold such perpetrators to account.”

Mr Jones added: “If men follow these common sense guidelines it will make a real difference in making women feel safer when they are out on their own.

“Horrific crimes like this are rare and North Wales remains one of the safest places in the UK to live and work but these simple measures can do a great deal to address the fear of crime.”