The group aiming to make major changes to traffic and parking in Llangollen is on the brink of confirming £2 million of investment for the town’s infrastructure, says its leader.

The news came from Llangollen county councillor Graham Timms, chair of the 2020 working group, in a video detailing its progress which was aired earlier this week on its own Facebook page.

Each of the group’s four members – two county and two town councillors – contributed to the hour-long film, gave their own appraisals of its performance since its formation four years ago.

Cllr Timms said they had gone online in person with the update because newspapers were “losing readers” and social media “often distorted healthy discussion”.

He began was saying: “We are on the brink of confirming £2 million in infrastructure for the town and we’ll find out in the next two weeks whether we have been successful.”

Fellow group member Roby Lovelock, a town councillor, said she got two messages from residents when the group was set up in 2017 – that it was “urgent and important to address the town’s long-standing problems around parking and congestion,” and that there was a feeling Llangollen had been missing out on opportunities from Denbighshire by being side-lined to towns further north in the county such as Rhyl.

The other Llangollen county councillor who is a member of the working group, Melvyn Mile, said it had received “incredible support and encouragement” from the leader of Denbighshire County Council and had drawn on the advice and expertise of its various departments including highways and road safety.

The second town councillor in the group, Cllr Austin Cheminais, who is now the Llangollen Mayor, explained that when they realised they didn’t have sufficient expertise in traffic and highways to fully develop solutions to the problems, Llangollen Town Council had “contributed and secured” further European, Denbighshire County Council and Area of Outstanding Natural Beauty funding to conduct a consultation and gather residents’ ideas.

He said: “A further consultation was held which was led by our consultants and the Lllangollen working team.

“Once we’d gathered your ideas we worked with the consultants to test them against what was allowed in law.” 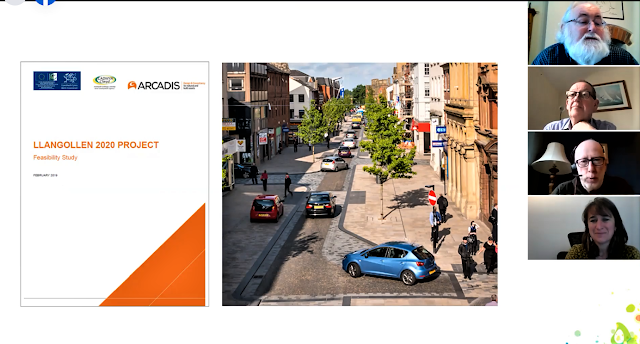 * The picture of the town which  "broadly illustrates" the group's aims for Castle Street.

Putting a picture of a town centre up on screen, he added: “This a picture from another town which broadly illustrates the feel that we are trying to achieve on Castle Street.

“The paving colours will draw together the greys from the square and the sandstone of the town hall. Sadly, there won’t be enough rooms for quite as many trees as that [meaning the town in the picture] but we’re working on getting as many as we can.”

He said that, separately, the group would publish full details of the plan to be implemented from October 2021 but detailed the main changes the project would introduce which were:

* Wider pavements and a narrower carriageway to “maximise pavement space and slow traffic, improving safety for pedestrians and cyclists”.

* Raised crossing points across Castle Street junctions to “slow traffic and improve crossing safety, especially for those with disabilities and small children”.

* Keeping Market Street to one way up as far as the public toilets “after the Covid restrictions have finished in the town”.

Cllr Cheminais returned to say: “Our consultants Arcadis have developed solutions based on your ideas, research and real-time traffic data. Further community consultations were held with more opportunities to feed into traffic surveys and meetings.

“There were more articles in local papers, Facebook Live sessions and more social media, all with the aim of refining ideas proposed.”

Cllr Mile said: “One of the key areas of feedback from these consultations was that the proposals didn’t go far enough to resolve the issues of the parking problems facing the town especially in the summer.

“So we’ve identified six groups with parking needs – town centre residents who don’t have designated parking spots, pop and shoppers, business owners and workers coming in for their jobs, disabled drivers, visitors by car in their thousands and visitors by bus.

“So it’s not going to be easy keeping everyone happy and discussions on this have been ongoing.

“This hasn’t been tried before and I know the reason why – it’s a nightmare!”

He added: “We tested the ideas at a public meeting, also with some discussion groups with people and businesses which would be affected by the proposals. We took on board some of their suggestions, for example loading bays on Castle Street.”

Cllr Lovelock said: “It’s all very well having these plans but where is the funding?

“This is something that the 2020 working group has taken on. We have met with numerous organisations looking for funding opportunities, given many presentations to those agencies.

Cllr Timms returned to say: “The good news is that Denbighshire County Council has a project plan in place - a critical path for delivery as they call it - and we’re working hard to keep to it. And so far it’s on track even though we’ve had the coronavirus challenges this year.”

Cllr Mile added: “So, it might have taken a bit longer than we anticipated, However, this project may be called Llangollen 2020 but it’s very much a Denbighshire project.

“People say that we never get anything out of Denbighshire, that it all goes up to Rhyl. Well, that will change if we’re successful in these grant applications.

“We’ll have a lovely new town centre, safer for you the residents, safer for the thousands of visitors who come here and it’s an environment where our businesses can thrive.”