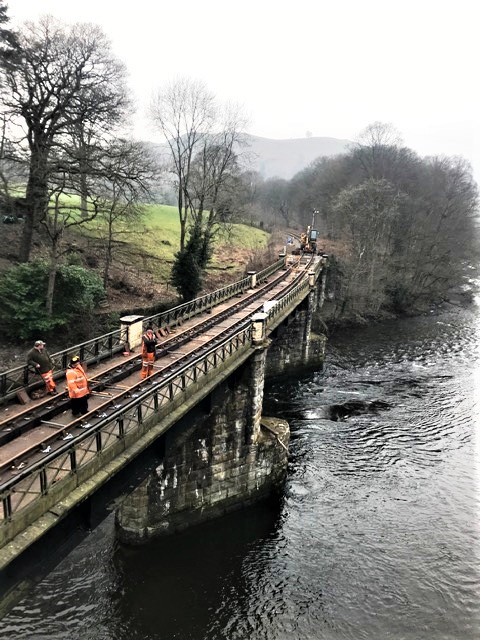 Despite the financial crisis currently facing its public limited company, volunteers from Llangollen Railway last week got to grips with rerailing the Dee Bridge after the 18 new timbers were put in place.

To run trains over the Victorian bridge the railway has had to replace its worn-out timbers.

New woodwork cost £15,000 and an appeal was launched last November by Llangollen Railway Trust to raise the required funds.

The appeal has proven a major success with members of the public and the trust together raising the entire amount.

All the rail has now been replaced on the timbers.

Rails at the west and east ends have been fixed in place with the chairs drilled and screwed down with rail keys added.

The rest of the fixing is subject to adjustment - level and gauging and completing the tie rods. A couple of joints will receive rail welds to help smooth the trip over the bridge.

As revealed by llanblogger, the board of Llangollen Railway PLC recently asked its bank to call in receivers after it plunged into insolvency to the tune of about £350,000 and could not legally continue trading.

With all operations on the railways now suspended, further work to complete the bridge in readiness for resumption of trains must await the administrator's permission.