Eisteddfod journalist among those remembered today 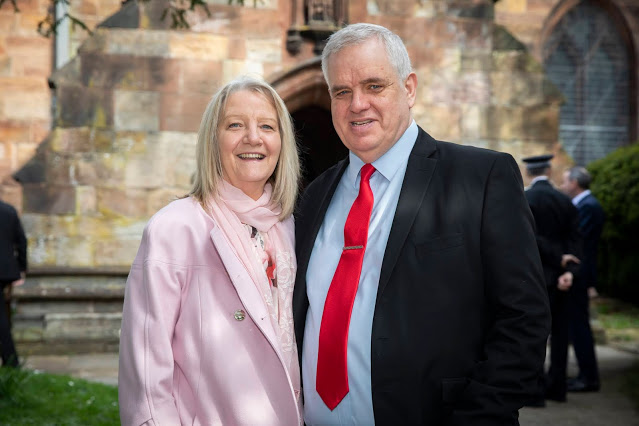 * The late Kevin Hughes with his wife Sally.

Among those who died from Covid-19 and will be commemorated today on the anniversary of the first lockdown will be a journalist who covered the Llangollen International Musical Eisteddfod for a number of years.

Kevin Hughes, who was also a Flintshire county councillor, died at the Wrexham Maelor Hospital after a long battle against Covid-19 in January aged 63.

His death followed that of his mother, June Margaret Hughes, 89, also from the virus on November 25 at the Countess of Chester Hospital.

Kevin had visited her briefly in PPE and accepted that going to the hospital may have caused him to contract the disease but he added: “I don't know how I got it, whether it was visiting my mum, it might have been in the shop or in the garage. I just don't know.”

He was born in Chester and attended Queen’s Park High School, Handbridge, and leaves a wife, Sally, with whom he celebrated 40 years of marriage three years ago, sons Chris, Steve and Andy, and seven grandchildren.

In a varied career Kevin Joined Cheshire Constabulary and was a police diver during his service and after his retirement worked for a time as head diver at the Blue Planet Aquarium, at Cheshire Oaks.

He moved into journalism with the Chester Chronicle and rose to be editor of the Flintshire Chronicle before his retirement and in recent years has worked for North Wales-based public relations company Ceidiog Communication with whom he helped to cover the Llangollen Eisteddfod for a number of seasons until just a few years ago.

He represented Gwernymynydd as an active and committed Flintshire County Councillor.

He was a former colleague of llanblogger journalist Phil Robinson, both at Ceidiog Communication and previously when they worked together on the Ellesmere Port Pioneer newspaper in Cheshire.

Paying tribute in January Phil said: "The small north Wales journalistic community has lost one of its most outstanding members which it could ill afford to do.

"Kevin, who I was privileged to know for 20 years, was a big man - in stature, talent and heart."