Around 400 bags of heather have been cut ready to be airlifted later in March by helicopter to some of the worst fire damaged areas of the mountain on Moel y Gamelin and Moel y Faen. 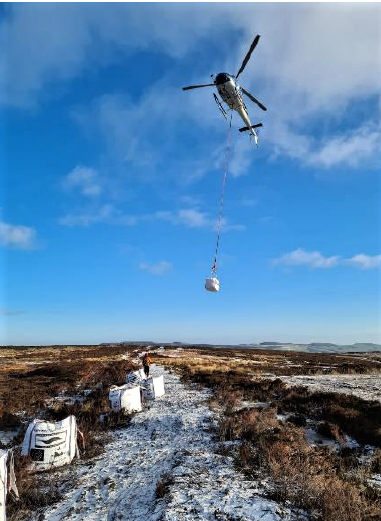 * The heather bags will be lifted into place by helicopter.

Just over one hectare of heather cuttings will be spread as a mulch, stabilising the soil and creating conditions for moorland plants like heather and bilberry to recolonise.

A further 68ha of the mountain will also be sown with an upland grass seed mix to create a nursery crop for moorland plants to recolonise.

This year’s restoration work will only cover half of the worst damaged area of the mountain and further work is planned in the future.

This approach has been successful on fire damaged moorlands in other areas and it is hoped that over time the vegetation will re-establish to benefit wildlife, farming and local communities alike.

For health and safety reasons, members of the public are requested not to venture out on to the Llantysilio mountain when the helicopter is airlifting the bags of heather.