New service to help parents abused by their children 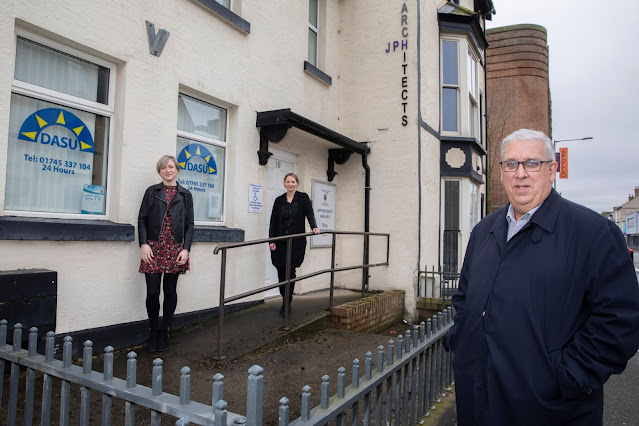 A pioneering service has been set up in North Wales to help parents who are abused by their children after a 70% increase in cases during the pandemic.

Break 4 Change is a new support project, backed by North Wales Police and Crime Commissioner Arfon Jones, that’s been established with the help of cash confiscated from criminals.

The therapeutic support provided by the Domestic Abuse Safety Unit North Wales (DASU) aims  to break the cycle of violence and prevent young people from becoming abusers in adulthood.

The new programme offers support to abused parents – and to their young abusers - and has received a grant of £5,000 from a special fund distributed by the PCC.

The Your Community, Your Choice initiative is also supported by the North Wales Police and Community Trust (PACT) which is celebrating its 23rd anniversary this year.

It is the eighth year of the awards scheme and much of over £280,000 handed out to deserving causes in that time has been recovered through the Proceeds of Crime Act, using cash seized from offenders with the rest coming from the Police and Crime Commissioner.

The annual awards scheme supports organisations which aim to tackle antisocial behaviour and combat crime and disorder in line with the priorities laid out in the Commissioner’s Police and Crime Plan.

There are 21 grants being allocated to successful schemes in 2021, with the winners being decided via an online voting system that has attracted more than 22,000 votes.

The £5,000 grant awarded to Break 4 Change after new research revealed a 70per cent rise in child to parent abuse during the pandemic, prompting the number of families seeking help to soar.

It will support the delivery of three programmes over the next 12 months across the counties of Wrexham, Flintshire, Denbighshire and Conwy. Together, these will support 15 adults and 15 children/young people.

Sessions will be run by experienced support workers who have received special training on ‘child to parent’ violence and will aim to help young people manage their frustration, increase parental wellbeing and reduce isolation.

DASU support worker Sarah Wilkie said: “Child to parent abuse has always been there but it remains underreported because parents often feel ashamed and blame themselves.

“They don’t always recognise their child’s behaviour is not acceptable, instead believing it’s part of adolescence.

“As an organisation, we are seeing an increase in referrals for support from parents as a result of child to parent abuse, particularly during the pandemic.

“One parent came to us via the criminal justice system. Her 14-year-old daughter had become self-destructive, was drinking alcohol, becoming abusive to her parents, and the situation was escalating.

“The parents didn’t know what else to do. They had been passed from agency to agency. They wanted to protect their child and were worried about the impact on her future – would she become a criminal, if they reported it would the situation escalate and lead to more violence?

“The fear of judgement is huge. That is a massive reason why parents will not seek help. They fear being labelled a bad parent or a troublesome family.

“Before this programme, our response was very much reactive. We provided emotional support, checked on the family concerned and liaised with other agencies.

“This programme will allow us to take a preventative approach and equip the child and their parent with the tools to understand what a healthy relationship is.”

DASU said a high volume of calls received by North Wales Police related to children or young people being abusive towards their parents. Until now, however, there were no specific services to support families in this situation.

“Young people’s behaviour is a way of communicating. There’s often some kind of trauma or bereavement or stuff going on at school and it’s getting to the bottom of it,” said Sarah, who missed a large part of her own education as a child through illness and felt drawn to help other young people overcome their problems.

“As a parent, you feel that you should be able to manage your child’s behaviour and don’t understand what is happening.

“If a child has been through a lot of trauma or lived with domestic abuse, how do they know what appropriate behaviour looks like?

“They might not have had any role models. How can you expect someone to change their behaviour without the tools to do it? This programme will allow that to happen.”

Siwan Lloyd Williams, Head of Services for DASU, said: “We expect this to have a great impact.

“It will help reduce abuse and violence in the home, help young people learn to manage their frustration and give parents the tools and confidence to deal with their child’s abusive behaviour. It will also help repair fractured relationships between children and parents.

“It should reduce the number of children who become homeless or have to be taken into care, help keep them out of the criminal justice system and prevent them from becoming adult perpetrators, so reducing the cost to the public purse.

“We would like to thank everyone who took the time to vote for DASU. We would also like to thank the Commissioner for his continued support.

“This funding will help us meet the needs of victims of domestic abuse in North Wales.”

North Wales Police and Crime Commissioner Arfon Jones said: “It has been an extraordinarily challenging year for us all but I am delighted that my Your Community Your Choice fund continues to support community projects across North Wales for an eighth year.

“Providing support for vulnerable people who are victims of abuse is a key priority in my Police and Crime Plan.

“The problem of children abusing their parents is one that many people will not be aware of but it is very real and something that causes untold hurt and anguish.

“This pioneering project being run by DASU will help break the vicious circle of abuse and hopefully repair the damaged being caused to these families in North Wales so that everyone concerned can move on and enjoy a positive and more harmonious future.”

PACT chairman Ashley Rogers added: “Your community your choice is a really valuable way of supporting communities and putting the choice of which projects are supported in their hands.

“It’s a very democratic process which is why I think it’s been such a long running  and successful scheme.

“It’s lovely project to be involved with and you can directly see the benefits from the funding in strengthening our resilient communities.”

Assistant Chief Constable Sacha Hatchett said: “This money includes cash from assets seized from criminals under the Proceeds of Crime Act. This is a particularly vital message as through the professionalism of North Wales Police Officers and with the support of the Courts, we are able to hit the criminals where it hurts – in their pockets.

“Our operations target all types of serious criminality including cross border crime, armed robbery, criminal use of firearms as well as drug production, importation and supply.

“Our communities continue to play a part in this success with local intelligence information given to our officers that help us to bring these criminals to justice.

“It sends a really positive message that money taken from the pockets of criminals is being recycled. This is turning bad money into good that's being used for a constructive purpose.”