Castle Street bollards to be replaced by planters, say councillors 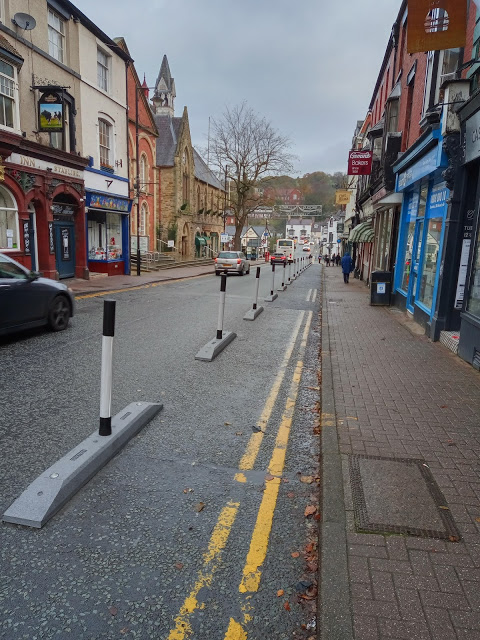 * The Castle Street bollards will be replaced by special planters.

Llangollen's two county councillors have today issued a statement in which they reveal that the Castle Street's controversial bollards are to go and be replaced with specially designed planters.

The lane defenders have split local opinion since they were installed late last year as part of a package of measures to help promote social distancing during the pandemic.

Earlier this month a 500-signature petition organised by Stuart Davies - now a town councillor - was handed in to the county council calling for the bollards to be removed.

The Llangollen Advocate group has also been posting on Facebook details of a number of accidents they say have been caused by the presence of the bollards.

The statement, issued by County Councillors Graham Timms and Melvyn Mile says: "We have been seriously concerned about the continuing reports of trips and falls on Castle Street and have been working with the county council to discuss ways of making the area as safe as possible for everyone.

"It is clear that the extra space to social distance has been appreciated by large numbers of people, but serious concerns have been raised about the trip hazard caused by the bases of the lane defenders that have been used along the road.

"We cannot ignore these concerns or the very nasty falls that have been so visually reported on Facebook recently.

"As a result we have now agreed a way forward with Denbighshire which involves two major changes.

"The first one is to use specially designed planters instead of the current lane defenders along Castle Street.

"This will remove the possibility of tripping on the bases of the current bollards.

"The second measure will involve painting a white line on the road both inside and outside the planters to help everyone to see clearly where the pavement ends and the road begins.

"Work will begin as soon as possible, hopefully with the lines being painted by this weekend.

"Removing the bollards will take a little longer as contractors will need to be appointed and traffic control arranged whilst the work is carried out. The planters will replace the lane defenders as soon as possible after that.

"The revised method will allow for some planting to brighten up the area whilst keeping the extra space for active travel and pedestrians in the town centre, particularly as the number of visitors coming to the town is expected to reach record levels over the coming weeks as the lockdown restrictions are lifted.

"Let's hope that over the next few weeks and months we will begin to see a much brighter future.

"Llangollen is a special town for all of us and we need to continue to work together over this difficult time for everyone’s sake."

Posted by llanblogger at 4:54 PM