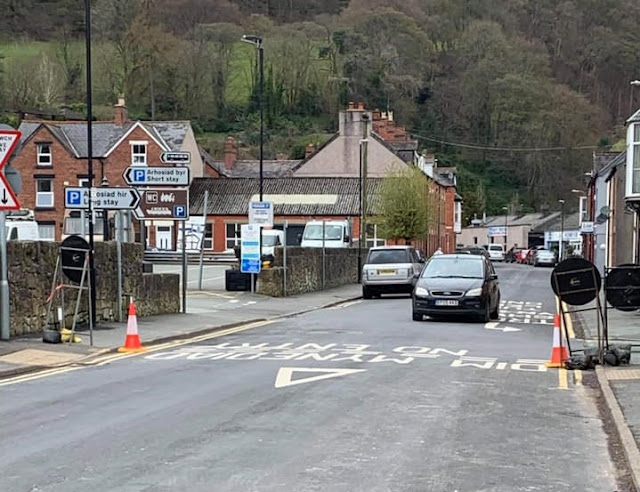 Further work has taken place on a temporary active travel scheme in Llangollen.

As part of the scheme in the town centre white lines have been painted on either side of the temporary rubber kerbs and bollards to make them more visible.

The temporary scheme was introduced to facilitate social distancing and make it easier for people to travel actively within the town centre.

“The active travel scheme aims to assist and facilitate social distancing in the town as lockdown restrictions ease and visitors return to our town centres.

“It is also aimed at reducing car journeys, improving air quality and helps provide safe routes for pedestrians and cyclists as well as providing health and well-being benefits.”

Public feedback will continue to be collected throughout the scheme.

"It is quite ironic that the person in charge of Public Protection for Denbighshire is continuing to deny that there is a problem with the bollards.

"Even more so now that today the news has come out in the Rhyl Journal, that Rhyl has followed Ruthin in getting them removed and Denbigh wouldn’t even allow them to be put in place.

"The cases of people tripping and falling, causing in some cases severe injuries, is now well documented. CCTV has surfaced showing how bad these falls are.

"This press release sent out by DCC is well out of date, with inspections carried out by a senior safety engineer and white lines being recommended to address the situation being put in place on Good Friday, 2nd April and within 5 -6 hours a man crossing the road seriously hurt himself, followed by others over the weekend. See below the list of documented accidents with three accidents after the white line solution was put in place.

"I believe there are probably 2-3 trips every day on these bollards and every couple of days at least one results in a fall and injury.

"Councillor Mile has stated this week 'Despite these regrettable accidents that have happened on Castle St, DCC officers are happy that the bollards and the scheme are fit for purpose.'

"This is a case of Politics versus Public Safety in my opinion.

"We are told that "Planters" will replace the bollards in 3 weeks but in November last year Councillor Timms told us publicly in an interview with Llanblogger that planters were not safe and bollards were the safest solution. So are people going to remain exposed to harm and injury for 3 more weeks?

"Are the new planters being proposed safer than what was available last November?

"Finally are the Members Cllr Mile and Cllr Timms, along with the officers doing their bidding, happy to continue allowing the public to be at risk by their actions or lack of?"

* The scheme has already prompted criticism after a bus appeared to have difficulty negotiating the corner of Market Street and East Street earlier this week.

A spokesperson for Denbighshire County Council said: “The temporary scheme introduced in Llangollen assists and facilitates social distancing in the town as we come out of lockdown.

“Traffic officers monitor the scheme on a regular basis and following a visit, signs have been re-positioned and buses are able to make the turn from Market Street onto East Street. We will continue to engage with members of the public, businesses and elected members.”

Posted by llanblogger at 4:39 PM