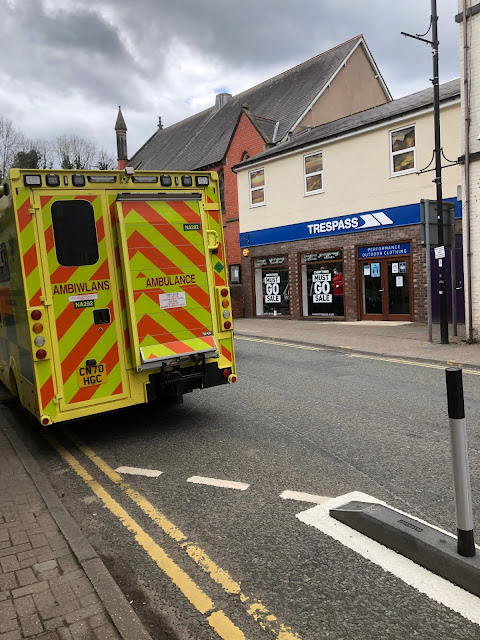 * An ambulance parked near the bollards in Castle Street.

The group campaigning for their removal claim the social-distancing bollards in Castle Street caused two accidents in which people were injured yesterday afternoon.

The bollards were installed by the county council late last year as a temporary measure to give more room for pedestrians using Llangollen’s main street during the pandemic.

But after an intense campaign by the Llangollen Advocate group, including a petition, county officials carried out an inspection and agreed to paint white lines around them to increase their visibility and then to replace them with specially-designed planters starting from next Monday, April 19.

However, Advocate claims the bollards have led to a series of accidents with people tripping over them and should therefore have been removed sooner.

Detailing what it says are the latest two accidents yesterday, Advocate posted on its Facebook page that just before noon an elderly man was left with severe facial injuries after falling over the bollards and then at 1pm a woman sustained injuries to her arm, wrist hand after a similar accident.

Starting off its Facebook post with the words "more blood on the streets of Llangollen," the group says that both accidents were avoidable, adding: "Avoidable in that DCC (Denbighshire County Council) officers and councillors knew of the previous incidents and injuries caused by these bollards and chose to retain these measures despite being called upon to remove them by local residents and businesses."

In an email sent later yesterday to a number of council officials and the area's two county councillors the group asks: "Do DCC consider that another fall and injury is an acceptable consequence to facilitate social distancing?

"Between now and next Monday more people could be hurt by these measures.

It appears that DCC are willing to gamble on no-one being seriously hurt or worse in the next five days to maintain these measures rather than remove them ASAP to prevent more people coming to harm."

To date we have seen no response or advice from DCC that provides any reassurance that more members of the public will not continue to be put at risk of harm by these TRO measures."

A spokesperson for Denbighshire County Council said: “Following concerns raised by the public, the decision has been taken to remove the rubber kerbs and accompanying bollards.

"These will be replaced with planters which are approximately 3 feet high.

"The planters will help to maintain sufficient pavement width for social distancing purposes. This work will commence on Monday, April 19. White lines have also been recently painted between the road and area of widened pavement.”

Town councillor Stewart Davies, who has been an opponent of the bollards, said in an email to llanblogger on Wednesday morning: "I have just had word that the planters are going in on the 19th. This is sheer sheer stubbornness.

"We know from what our eyes tell us that the engineers from DCC were plainly wrong in their putting in of cycle lane defenders. We know that Cllr Timms said on Llanblogger that they couldn't put planters in because they are dangerous. Are they now saying they arent? Who is to say who is right?

"The real answer here is get rid of the bollards and revert to the status quo."

Posted by llanblogger at 8:35 AM