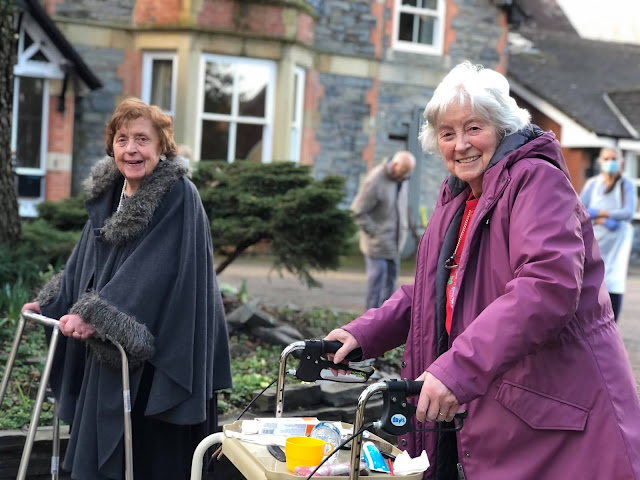 * Iola Roberts, left, and Audrey Dunbebin practice their walk around the
grounds of The Old Vicarage. 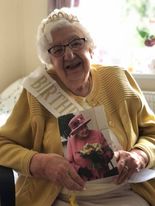 Centenarian Ena Strange is also aiming to
take part in the sponsored challenge.

Residents at a Llangollen care home are putting their best feet forward to raise cash for the NHS in a moving tribute to their hero Captain Sir Tom Moore.

On Friday April 30, what would have been the 101st birthday of the man who raised millions for the health service by walking around his garden, people from The Old Vicarage - who proudly call themselves the Vicarage Dream Team – will be taking to their walking shoes, walking sticks and frames for a similar money-spinning challenge.

And they’ll be donning fancy dress as they head off on 101 laps of the grounds of the home on their big Walk for Sir Tom.

Among those doing their bit for the NHS will be 100-year-old Ena Strange who recalled: “I remember hearing about the first heart transplant on the radio. It changed everything. The NHS has opened the door for so many life-saving procedures, which is why a lot of us are still here and for that we are grateful.

“I admire Captain Tom doing what he did. You can feel useless at times, which upsets me, but I can do my bit by walking. I’m going to give it a try.”

Resident Iola Roberts, 87, who was involved in many local community groups, said: “I thought my end had come for good deeds but Captain Tom showed you’re never too old to raise money for a great cause.

“I hope we will inspire others to do good things, we all have something to give no matter what age you are.”

Her friend Audrey Dunbebin, 86, said: “The NHS is a fantastic organisation, both my daughters worked for it, as a nurse and occupational therapist.

“The NHS has saved my life and the lives of my family members, including my own cancer treatment, which meant I’m still here to see my great grandchildren. We owe them so much.”

Kim Williams, a relative of another member of the Dream Team, spoke of her pride in what they were planning.

She said: “All the residents of the Old Vicarage are like the symbol of the oak tree. They have all shown their strength, wisdom and endurance through this dreadful pandemic. I’m so proud of what they are doing.”

Old Vicarage staff member Fiona Collins, who has organised the event, said: “We all watched in awe of Captain Tom Moore’s heroic efforts to raise money for the NHS and he’s been a huge inspiration to us all.

“The pandemic has been very difficult, especially for those in their later years like Captain Tom but, regardless of age, he went for it and succeeded and we really want to celebrate that in his memory by doing 101 laps of our oak tree in the Old Vicarage grounds.”

India Large, a student nurse working at the home, said: “I’m really excited to work for the NHS. It’s an honour to work for an organisation that’s been around so long.

“It’s so nice to see the residents at The Old Vicarage putting in so much effort to raise money for the NHS. I believe it will be a really special day.

“It would mean a great deal to those taking part to raise funds to feel they are giving something back to those who have worked incredibly hard in our NHS during the most difficult year."

Natalie Jones, a senior carer, agreed: “I remember at the start of the pandemic it was so frightening for us all. We watched as the NHS frontline heroically continued their work, putting themselves at risk - they truly are our heroes.”

Bethan Mascarenhas, who is the Old Vicarage’s Responsible Individual, said: “We’ve started a walking club at the home, so we can prepare and get out to keep fit, which has been a lot of fun.

“It’s nice to hear everyone out in the garden being together laughing and having a good time for a great cause.”

She added: “We want to show we are fully behind what the NHS do and what they have achieved. We love the NHS and it’s been a life saver to some of our residents on a number of occasions and for that, we want to show support and give back - just like Captain Tom.

“He did so much for all of us, now it’s time we do something for him.”

* If you’d like to donate to the Old Vicarage sponsored walk, go to: https://www.justgiving.com/fundraising/OldVic101Walk or make a donation directly to the home.