Eisteddfod advertises for an executive producer 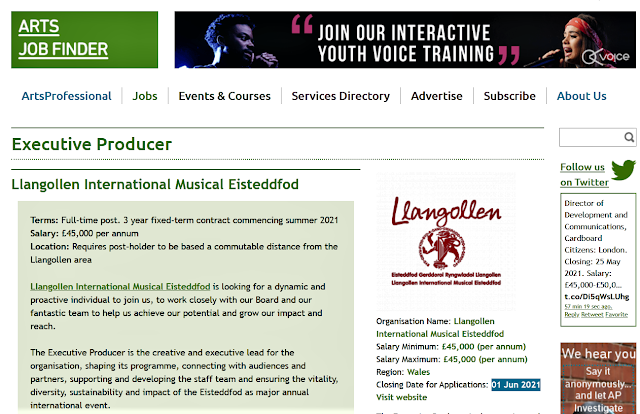 Llangollen International Musical Eisteddfod is looking for an executive producer.

An advertisement for the £45,000-a-year post has just appeared online in the Arts Jobs Finder.

The person appointed, it says, will work closely with the board and “our fantastic team to help us achieve our potential and grow our impact and reach”.

The ad explains: “The Executive Producer is the creative and executive lead for the organisation, shaping its programme, connecting with audiences and partners, supporting and developing the staff team and ensuring the vitality, diversity, sustainability and impact of the Eisteddfod as major annual international event.

“As Chief Executive the Executive Producer is also the lead decision-maker, responsible for the strategic planning and financial sustainability of the company.

“They model a working culture that inspires and supports staff, trustees and contractors.

“They have the confidence of the trustees, volunteers and key stakeholders. They are the face of a world-class programme that attracts a broad audience from North Wales, the North West of England and beyond.

“We want our workforce to be representative of all sections of society and we actively welcome candidates who are currently underrepresented in the arts.

“We are seeking an inspiring individual who values creative ambition, inclusivity and internationalism.”

The post is full-time on a three-year fixed-term contract starting this summer. It requires post-holder to be based within a commutable distance from the Llangollen area.

Closing date for applications is June 1 and more details can be found on the Arts Jobs Finder website at: https://www.artsprofessional.co.uk/jobs/premium/llangollen-international-musical-eisteddfod/executive-producer

Last week the eisteddfod management revealed that, as part of a restructuring exercise, four redundancies had been made from the festival’s six permanent staff.

The impact of the pandemic was blamed.

As part of the same exercise two roles have been created and filled by existing staff from the team of six.

A statement added that a further post was due to be advertised shortly, and this is clearly that of the new executive producer.

Due to the pandemic the 2020 eisteddfod had to be cancelled and replaced with a series of online events.

This year’s festival has also fallen victim to the ongoing Covid-19 crisis and has been postponed until next year. A similar programme of alternative events is being planned.