Enterprising pair aim to give more power to old bikes 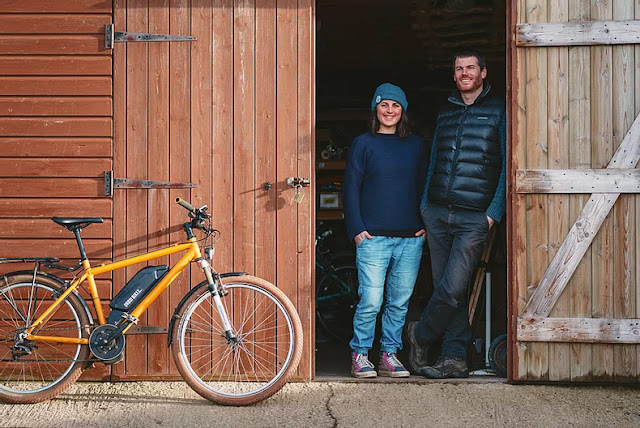 * Beth Ward and Robin Hughes are opening a community bike workshop in Llangollen.

A pair of cycling enthusiasts are aiming to put new power into old bikes with their latest enterprise in Llangollen.

Beth Ward and Robin Hughes were on a four-month cycling holiday through Turkey when they came up with the idea of making bikes a more vital part of daily lives in the UK.

And they realised that this means equipping more machines with electric power.

Back home they gave up their day-jobs to concentrate on launching their new social enterprise company, called Drosi Bikes, in Ruthin specialising in fitting unwanted older bikes with electric power.

Robin used to work in the fishing industry as a marine surveyor while Beth had trained as a product designer but for the last few years had been working in the social enterprise/charity sector as a project manager.

They started out in the garage at their home but are now about to open a new, fully equipped community bike workshop in the former Fringe theatre building in Parade Street.

Their aim is to encourage new riders to get fitter for a fraction of the cost of buying a new e-bike.

Recalling how their new venture was inspired by their foreign holiday, Beth said: "Cycling through Europe, we soon became aware of how bikes are used so much more in daily life to do things like taking the kids to school or to go shopping.

"We realised that the UK really lags behind in this respect and still sees cycling as a hobby rather than a mode of transport.

"As our holiday progressed, we became more and more convinced that we could do something to make a change."

Robin said: “After a year of planning, Drosi was launched just as the Covid pandemic hit its first peak and Wales was in its first full lockdown.

"We could see people were cycling more. They had the time, the roads were quieter and people were beginning to dust off their old bikes, which they probably hadn't used for years.

"People are beginning to learn that the great thing about e-bikes is that you can cycle further for longer. You can choose to pedal or use the motor.

"Either way, you are being more active yourself and you will be using the car less."

Drosi is a play on the Welsh word trosi, for convert, and the pair say they will carry out the e-bike conversions at an affordable price compared with off the shelf e-bikes and that all people have to do is supply the bike.

The cost of an e-bike conversion is £860. This includes the motor, battery, fitting and a basic service.

During the Welsh Government’s Wales Climate Week last year a number of individuals and organisations across the country were recognised as 'low carbon heroes' via a panel of government representatives. This acknowledged their work to tackle Climate Change and amongst them was Drosi Bikes.

The pair are hoping their new Llangollen workshop will be opening in mid May.

Alongside converting and repairing bikes they will be taking bike donations for recycling, running volunteer activities and offering a number of donation-based activities to support people in the local community to cycle including a DIY workshop where people can come and use the tools and e-bike rental (full price for people living outside the LL20 postcode).