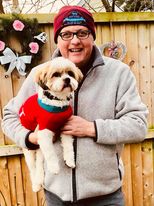 * Cllr Mark Young with his own dog, Billy.

Dog owner and pet lover Mark Young, who’s challenging to be the next Police & Crime Commissioner for North Wales, is calling on Government to introduce a new law that will make it easier to prosecute people who steel much-loved family pets.

He said: "We need to impose tougher sentences on people who 'dog nap'.

“Through lockdown the amount of dogs being stolen has increased by 170% - the worst year ever.

"There have even been reports of people out walking in Wales with their dogs off the leads and they have been scooped up and stolen."

Mr Young, who is a county councillor for Denbigh and is standing as an independent is the May 6 PCC election, added: "The kennel club state that less than 5% of dog napping cases result in criminal convictions.

"But 96% of people think dog theft is a serious problem and 78% of people are fearful to walk their dogs off the lead and this number rises to over 80% at night.

"The impact of losing your family pet and best friend is heartbreaking and the thought of them being taken from your own back garden is awful.

"People are scared to leave their dogs in their own gardens now while being in their homes for fear of them being stolen . This should not be a situation we find ourselves in and is unacceptable.

"Currently pet theft is dealt with under the Theft Act 1968 which treats the theft of animals in the same way as non-living objects, attaching a monetary rather than emotional value to them being stolen.

"If I am elected as Police and Crime Commissioner I will work with the Chief Constable to look at a pet theft unit for North Wales Police with a dedicated officer in each of the six counties to help prevent and pursue vigorously those who steel our beloved pets.

"This is an issue which should not be ignored. At the moment government have promised to look at this situation. This is not good enough – with the shocking rise of pet theft we need to act now and understand the emotional and mental health impact of a much loved family pet being stolen."