Campaign aims to cut death and injury to bikers 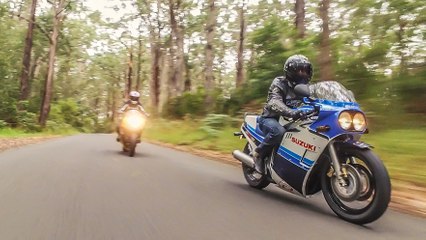 A campaign aimed at reducing the risk of motorcycle-related deaths and serious injuries on the roads is now underway across Wales.

The annual Operation Darwen campaign, which runs from early spring through until the autumn, is aimed at promoting rider safety and will see high visibility patrols being carried out along key routes which have been identified as risk areas.

Over the coming months, officers from the Roads Policing Unit, the Armed Alliance Unit, the Special Constabulary Road Safety Unit and Go Safe will be engaging with riders at popular meeting spots for enthusiasts as well as on certain routes as part of the operation.

Officers will also be checking that bikes are roadworthy, paying particular attention to tyres. Worn or under inflated tyres on motorcycles have been one of the most common themes during collisions, and yet is easily prevented by riders doing basic checks.

Motorcyclists are amongst the most vulnerable groups of road users, and they are at a higher risk of injury and collision than other road users. Although a motorcyclist may not be at fault, their vulnerability invariable means that they suffer more serious injuries in a collision.

Motorcycle casualties are highly represented and on average represent 25% of all killed or seriously injured casualties within the region based on the last 3 years.

Chief Inspector Jon Aspinall from the Roads Policing Unit at North Wales Police said: “Reducing casualties on our roads remains one of our top priorities.

“We look at all motorists as part of the Op Darwen campaign, however during the spring and summer months, increased focus is given to motorcycle safety as larger numbers of motorcyclists take their bikes out to take advantage of the good weather and fantastic scenery we have here in north Wales.

“As such, motorists are being urged to be extra vigilant for motorcycles during their journeys and ensure they give sufficient room when following bikers.

“Similarly, drivers are reminded to continually check for motorcycles when moving off, or emerging from junctions.

“Riders also have an important role to play in ensuring their own safety by travelling at an appropriate speed for the road, weather and traffic conditions, wearing high-visibility clothing and always wearing a helmet and other appropriate attire.

“We want people to enjoy travelling on some great roads here in north Wales and in Wales as a whole, but most of all we want them to ride and drive safely and responsibly. We will continue to target, with a view to prosecution, all those that ride or drive dangerously, at excess speed, overtake on solid white lines or commit any other road traffic offences.

“Our officers – as well as partners from other emergency services see far too many tragedies, many preventable on the roads. Staying safe on the road applies to every single one of us, whether we have two or four wheels on our vehicle. I would urge riders and drivers to think about their behaviour and what changes they could make to improve their own safety and that of other road users.

“Op Darwen is not about spoiling people’s fun but encourages all road users to be safe and competent with the aim of reducing the number of collisions on our roads.”

North Wales Police are also encouraging bikers to ensure their machines are ready for the months ahead – paying particular attention to tyres and brakes.

Teresa Ciano, GoSafe Partnership Manager and Chair of Road Safety Wales said: “Motorcyclists are among the most vulnerable of road users and through the engagement and education delivered through Operation Darwen we hope to encourage more bikers to make the safe choice when out riding.

“Ride within the legal speed limit, prepare for your journey, give yourself enough space and time, position yourself in the safest and best place to maximise your visibility of potential hazards and consider further skills training to improve your performance and safety on the road.”