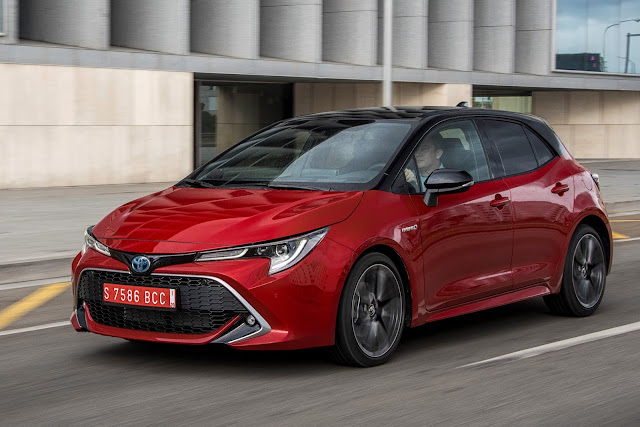 * The new Toyota Corolla, outside and inside. 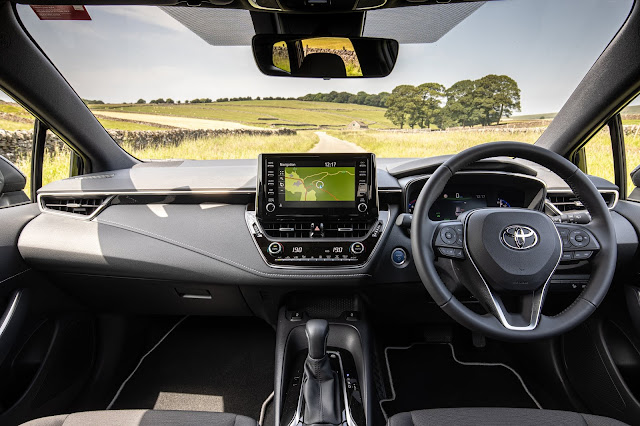 When it comes to comebacks there have been some corkers.

Winston Churchill famously said "I'm finished" after he was sacked as First Sea Lord in 1915 and look what happened to him.

Muhammad Ali regained his world heavyweight boxing title against the odds having spent years in the wilderness for refusing to fight in the Vietnam war, and who would have given Dennis Taylor a chance against Steve Davis when he was 8-0 down in the 1985 world snooker championship final. He won on the black ball in the final frame!

There are scores more, many less notable, and into that category falls the Toyota Corolla. The world's best selling car disappeared from our roads in 2006 to be replaced by the Auris but it never slipped easily into the Corolla's big boots so after 13 years in exile Corolla is back.

What's more the Japanese favourite is built in Derby and the hybrid engine built at Toyota's factory on Deeside which is good for Wales and the UK in general.

It is hardly worth comparing new and old Corolla because so much has changed since 2006 so what we are really looking at is how the new model compares with Auris.

Toyota will have spent billions of Yen developing Corolla, in particular making sure it will suit the needs of the vast European market where competition is so fierce it is like walking into a den of lions.

The upshot is a totally new car. It sits on the same platform as the C-HR, one of my favourite crossovers, and is a completely different animal to the nondescript Auris.

Corolla is a very decent car to drive and goes to show it is not just Volkswagen and Ford who build top notch hatchbacks, in fact you can now add a lot of other car makers to that list.

Toyota's focus is on petrol hybrid engines, 1.8 and 2-litres, with a conventional 1.2 turbo for those who do not want the extra cost of an electric motor. There is no diesel.

My test car was the 1.8 litre and I had my doubts when I saw it produced a lowly 120bhp, not much for such a big engine. Yet with the help of the 53kW electric motor it is quite lively up to 60mph when performance tails off and the engine starts to sound a little gruff. At least the combination of engine and electric motor provide enough mid-range pick up for confident overtaking.

The big question is what's it like on economy? This is a self charging hybrid so travel on electric power is generally limited to slow speed movement around town although it comes in handy when scraping along in heavy traffic reverting to electric power so saving fuel and cutting exhaust emissions.

I have driven lots of hybrids in the last 10 years and more often than not have been disappointed with fuel consumption but I can have no complaints with Corolla. Over 750 miles of mixed driving the computer showed 66.2mpg and on one 300 mile round trip I hit 70mpg. Now that's what a hybrid is all about.

To get the best results from a hybrid driving style has to be moderated, no harsh acceleration or heavy braking, particularly into roundabouts, and that is exactly the tactic I employed on the trip that returned 70mpg.

On the motorway I kept to a steady sixty and drove as evenly as possible on A roads. I doubt I would have done any better in a diesel.

Corolla had to be a better all rounder than Auris and it is. It sits on Toyota's new platform, is 60 per cent stiffer, has new multi-link rear suspension, and steering which is sharper and gives the driver a much better feel for what is going on down at the front wheels.

Everything is neat and tidy along the dashboard with a central 8in touchscreen, clear instrumentation and a variety of graphics to monitor hybrid progress.

Cabin space is just on par as is boot space so if the latter is an important factor then check out the opposition because there are some that do better.

As comebacks go Corolla has achieved its aims. It is well built, has numerous safety features and a decent spec list although I am damned if I could find a USB charging point. Surely they haven't forgotten to fit one?

Verdict: Corolla isn't as engaging to drive as a Golf or Ford Focus but is up there with Mazda3, Seat Leon and Kia Ceed.

part from an enthusiastic driver who is going to notice? And anyway, this isn't a car for the enthusiast, it is a full- blown family motor and the family is going to be very happy with it.