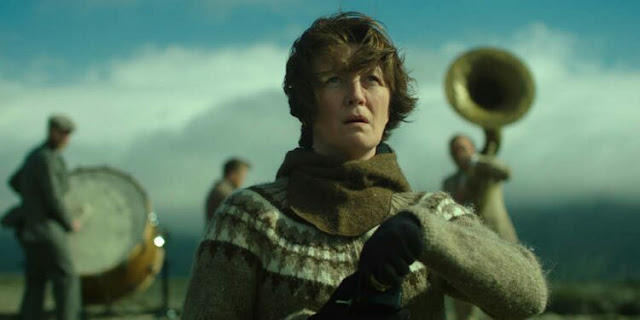 * A scene from Woman at War. 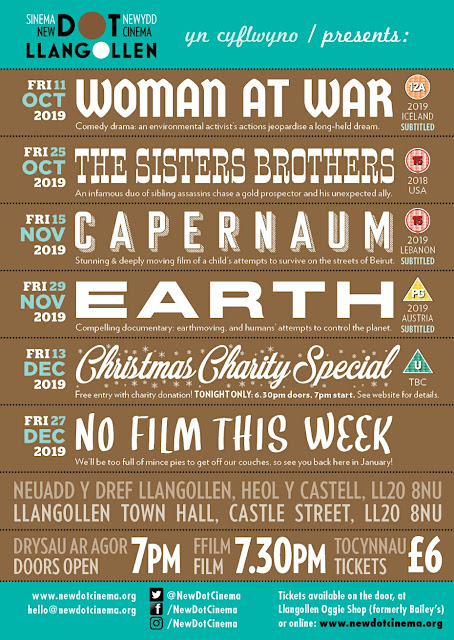 It was the standout winner among audiences at preview screenings for community cinemas this past Spring and we’re delighted to bring it to the Town Hall.

To all appearances, Halla has a blissful life cycling through the streets of Reykjavik from choir practice to yoga classes (and vice versa). But she has a secret life as a lone environmental activist known as “The woman of the mountain”, waging a one-woman-war on the encroaching industry that threatens the stunning highland landscape around the city.

As she plans her boldest operation yet, she gets the unexpected news that her application to adopt a child has been approved and she has to choose between her environmental crusade and fulfilling her dream of becoming a mother. Woman at War is funny, moving, dramatic and quirky.

Tickets are available online via Skiddle or from the Llangollen Oggie Shop and Fine Foods (formerly Baileys) in Castle Street.

Also in our Autumn programme are:
October 25th: The Sisters Brothers – In 19th century America, an infamous duo of sibling assassins are hired to find (and kill) a gold prospector who says he can find gold with a miraculous chemical formula. It’s all Western, part-comedy, part-thriller.

*November 15th: Capernaum – A stunning, deeply moving film about a child’s attempts to survive in the brutal streets of Beirut. After a series of disastrous events, 12-year old Zain sues his parents for giving him life. As his case moves through the courts Zain thinks back to the events that have brought him to this dramatic turn.

*November 29th: Earth – This is something of a coup for New Dot Cinema because, as far as we can tell, after its premiere at the Berlin Film Festival this past Spring, it hasn’t yet been shown in cinemas outside film festivals.

December 13th – The Christmas Film. New Dot will announce the festive feature shortly but, as last year, it will be free entry with a charity donation.

New Dot will post details on its Facebook page and website shortly. For this night only they'll also be screening the film slightly earlier at 7pm to make it easier for a younger audience to come along. Details to follow.

* Some posters have an incorrect screening date for our November films. These are the correct dates.

* More information on all the films can be found at the website newdotcinema.org or the Facebook page.