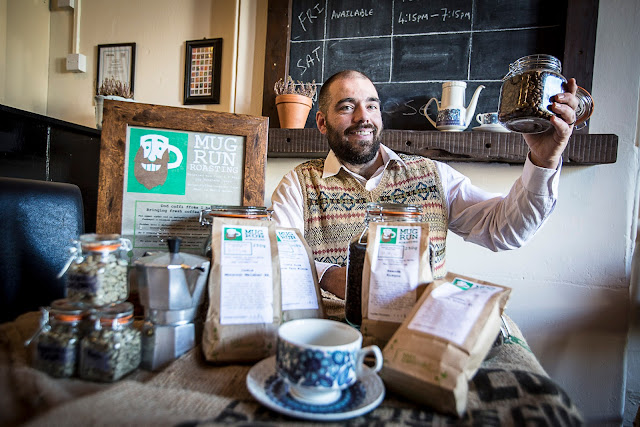 A speciality coffee maker who started off roasting coffee beans over a camp stove in his shed is celebrating his sixth anniversary by brewing up a luxurious blend in honour of a top food festival.

Barman turned barista Tim Parry is now producing in one afternoon what he previously made in one week and has moved into an industrial unit in Rhyl.

He originally launched his business, Mug Run Coffee, in December 2013 - and credits top 10 UK food festival Llangollen Food Festival for getting his name on the map.

As a thank you to the festival, he is concocting a new limited-edition blend for this year’s event which will be exclusively available to visitors to the popular food festival.

The event will be held at the international pavilion at Llangollen on Saturday and Sunday, October 19 and 20 and has now been hailed by the Daily Telegraph and the Independent as one of the Top 10 food festivals in the UK.

Although Tim is busy perfecting the final recipe, he has promised to deliver a tantalisingly tasty combination that is a fitting tribute to the Llangollen area.

Welsh-speaking Tim is relishing the chance to return to Llangollen to mingle with fellow food producers and customers again and use his mother tongue.

“The festival really is a great place to be,” said the 40-year-old, who lives in Prestatyn.

“I’ve been coming along for five years now. There are lots of Welsh speakers and it brings lots of local traders together.

“I’ve always had a really positive experience meeting new people there and it’s nice to see the same ones returning every year. It really has helped introduce people to my brand and grow.”

Originally, Tim worked in the hospitality industry, mainly in pubs and bars in Rhyl. But coffee has always been a passion and he continues to have aspirations of owing his own café or shop one day.

When he launched his business in 2014, Tim was working for an agency taking on factory work. Coffee roasting started off as an experiment until he realised the quality of what he was roasting was actually good enough to be sold.

“I’d roast the beans off a camping stove in the shed and pack them in the house,” he said.
“I did a lot of research to find biodegradable, compostable packaging. At that time, there wasn’t too much of it about. When I found the right packaging, I saw some labels which I could print myself and it all came together.”

Tim bought a shed in his back garden and transformed it into a coffee roasting unit.

“Originally, I sold at local craft markets and small events. I was surprised how well it took off. To go from craft markets to quite large events was really something. It was quite a leap forward for me,” he said.

“We’re now selling a lot more. What I used to produce in one week I now produce in an afternoon. It’s going quite well.”

Tim has now moved production to an industrial unit at Morfa Clwyd, Marsh Road, Rhyl, which has freed up some valuable space at home. He has also purchased a pre-loved propane roaster that he has converted to natural gas which has increased his output and aligns with his environmental values to reuse where possible. Tim hopes one day to design and build his own wood-fired roaster to become exclusively off-grid.

He has also discovered a speciality coffee bean importer on the south coast which has enabled him to offer his customers ethically-soured, exotic flavours that are otherwise unavailable.

The UK has seen a rise in artisan micro-roasters with around 200 now in the UK. As the appetite for good coffee has grown so too has the possibilities for new and exciting flavours.
“At the time I started there was only a few speciality coffee importers,” explained Tim.

“Coffee has changed a lot in the last five or six years. People are becoming more knowledgeable about coffee and understanding the different flavours. It’s like fine wine.

Some wines have gooseberries or raspberries – the flavours are already locked in there – you have to know how to bring them out and when coffee is brewed correctly all the flavours should come out.

“Coffee has to be well-balanced and not particularly acidic or bitter. You’re trying to get the balance right where all the flavours engage with each other. If you don’t get it right, the flavours fight against each other and it doesn’t make for a pleasant cup of coffee. You have to try different ratios and see what works together.

“My customers like the flavours and the way the beans have been roasted. All the coffees have a very distinctive flavour. It’s nice to see customers trying it and realising how good coffee can actually be with all these unique flavours.”

The name ‘Mug Run Coffee’ was originally coined when Tim contemplated establishing a coffee van. The reaction from friends and family was so positive, Tim decided to stick with it.
He now works five days a week for the business, either in production or selling at local farmer’s markets and stalls, and is expanding at a comfortable pace.

“It’s growing at a steady rate. I have a few restaurants, shops and cafes on-board in Rhyl and across North Wales,” he said.

“I also have some in Cheshire and Shropshire. There have been people from Scotland and the south east and all over who’ve bought my coffee. It’s going well.”

Llangollen Food Festival committee member Phil Davies is looking forward to sampling the festival’s honorary brew.
He said: “It is wonderful to hear success stories from local producers who continue to benefit from the festival exposure. Llangollen really is a fantastic launchpad for new and existing businesses and celebrates the hidden culinary wonders this part of the world has to offer.”
* For more information about the Llangollen Food Festival please visit www.llangollenfoodfestival.com