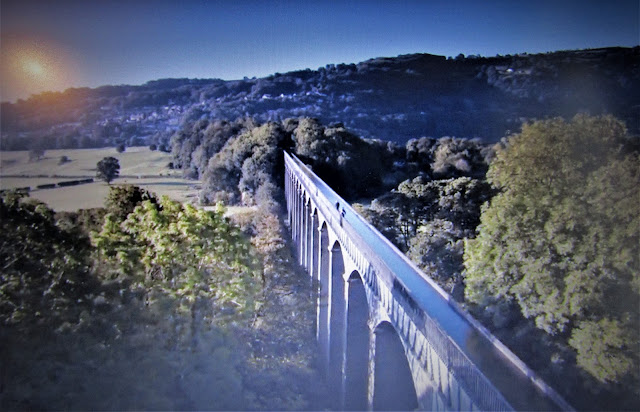 * A scene from the new film showing the aqueduct.


A film showcasing the beauty of an eleven-mile stretch of the Dee Valley near Llangollen has been unveiled.

The film shows the day in the life of the World Heritage Site (WHS) from dawn until dusk.

It was recently premiered at the WHS UK Annual Conference in Llangollen and highlights the magnificent structures, landscape and activities which can be enjoyed throughout the day.

They will highlight structures, landscapes or activity referred to in each title and due for release in the near future.

All of the films, funded by Visit Wales, are part of the celebrations for the 10 year anniversary of the Pontcysyllte Aqueduct and Canal receiving World Heritage Status.

The main purpose of the commission is to highlight the outstanding natural landscape, engineering and modern-day function as a tourist destination.

Each film features the entire eleven miles as it awakens in the morning until the sun sets in the evening, demonstrating some of the activities that people of all ages can enjoy and experience.

It coincides with the final week of the hugely popular luminaire spectacle of iconic structures, putting Thomas Telford’s famous aqueduct at the centre of the celebrations. It ends this Sunday, October 27.

Wrexham County Borough Council’s Regeneration Manager Allan Forrest presented the films to the conference and said it had been well received, highlighting another important landmark in the promotion of the visitor attractions that welcome thousands of tourists and locals each year.

He said: “We are fortunate to have a stretch of waterways that begin at Gledrid Bridge in Shropshire, England to the Horseshoe Falls in Denbighshire. Over the past ten years we have continued to push the boundaries of how we can continually attract tourists to the area and this has only been possible through private and public funding.

“There are exciting plans ahead and our new Management Plan will be announced shortly as we continue to develop our vision for a masterplan for the Trevor Basin Area.”

Adnan Saif, from the charity, Canal and River Trust, said: “This film shows really showcases the beauty of the Llangollen Canal and why it’s such a fantastic place to visit throughout the year.

“Research shows that being next to water makes you feel happier and healthier and with 11 miles of the World Heritage Site to visit there is something for esveryone to enjoy. Whether you want to explore our 200-year-old heritage, spot the local wildlife, explore the canal on the water, or simply going for a leisurely stroll.  Whatever your reason, a visit to the Llangollen Canal, is a day well spent for the whole family.”

* To see the films, go to: https://www.dropbox.com/sh/cp6hqjlhcqtll7h/AACU3kHOCbJwQLKOHCIHpR14a?dl=0

Cllr Hugh Evans OBE, Leader of Denbighshire County Council, said: “I would like to congratulate everyone involved in helping to stage this fantastic event. The luminaire was a chance to showcase Denbighshire and all it has to offer. It was a stunning way to mark the 10th anniversary of gaining World Heritage status and was an amazing spectacle for visitors and residents alike. I am pleased it was such a success.”