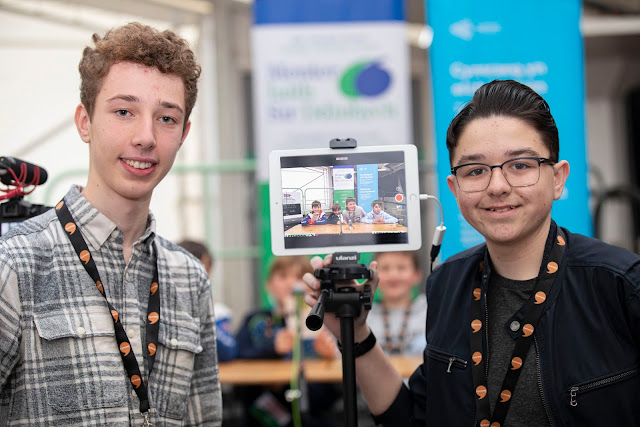 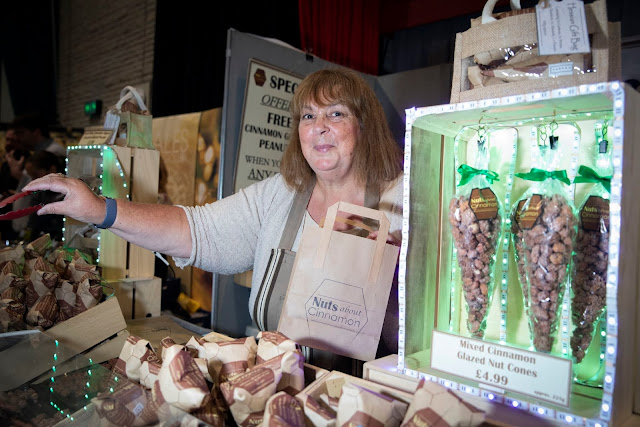 * Michelle Davies of Nuts about Cinnamon. 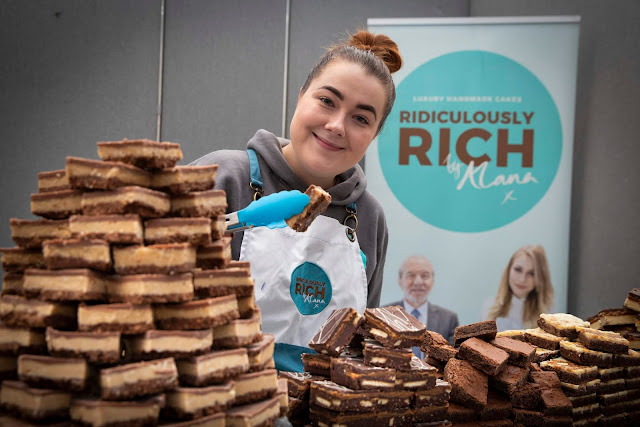 * Katie Lancashire with the ridiculously rich by Alana fudge cakes.
Thousands of food lovers got a taste of the Welsh language at a popular festival – as well as sampling the international language of coffee.

Organisers of the Llangollen Food Festival were thrilled with the turn-out over two bustling days at the popular event which has been hailed as one of the highlights in the UK’s culinary calendar.
Visitors also given the opportunity to sample the delights of  the Welsh language as they browsed more than 100 stalls at the famous International Pavilion.
The festival teamed up with Menter Iaith Sir Ddinbych, one of a network of organisations established across Wales to promote the language, and pupils from the nearby high school, Ysgol Dinas Bran and Ysgol Brynhyfryd, in Ruthin.
The youngster set up  a taste-test panel and produced a Vlog which was posted on YouTube.
Menter Iaith Sir Ddinbych chief officer Ruth Williams said: “Llangollen Food Festival is a brilliant event, attracting thousands of people yearly and a perfect chance to get more people who don’t normally converse in Welsh to try basic sentences.
“Welsh-language speaking exhibitors agreed to wear lanyards signifying they are bilingual. It meant fluent Welsh-language speakers could talk to them in their native language, but learners and complete beginners also knew immediately that they could have a go at conversing with the stall holder in Welsh.
“We had leaflets produced to distribute among festival goers providing basic translations of words which might be useful in a culinary environment. They include Blasus (tasty), Cacen (cake), Siocled (chocolate) and bread (bara).
“The project’s been a great success with really positive feedback from people who enjoyed trying out Welsh in such relaxed, fun surroundings.”
Ysgol Dinas Bran media studies students Damon Richards-Gilliam, 15, and Jim Norman, 16, filmed the taste-test vlog.
Damon said: “We’ve worked with the food festival Menter Iaith team for three years and always found that talking about food is a great way to break down language barriers.”
One exhibitor invented his own language to promote his Rhyl-based Mug Run coffee roasting business.  Tim Parry had postcards printed for distribution to customers, teaching them the novelty sign language.
He said: “I’m really proud of it. I formulated it as a result of years of experience. I realised that when customers talk about coffee brewing machines and methods, they use different hand signals.
“A flat hand pressing downwards, for instance, means a cafetiere, a clenched fist is a stove top method, a finger pointing down indicates a drip pour machine. I became so expert at interpreting them that I eventually decided to catalogue the different signs by hand-drawing small sketches of them to print on my postcards.”
Tim has exhibited at Llangollen for five years but for the first time he delivered a workshop for people to taste different coffee flavours and have a go at making their own. He also produced a blend of roasted coffee, called Hamper, in celebration of the 2019 food festival.
“It’s a great event I always enjoy so I wanted to create a blend especially for it,” said Tim who was helped on his stall by his mum Meryl Bowker.
Neil  Moffat and wife, Claire Hemingway-Moffat, who launched Hemingway’s pesto in Churton, near Farndon, cooking up their special recipe in their home kitchen, were also having a great time.
Neil said: “We’ve got four children who all went off to university, but none were very good cooks.
“When they would come home Claire would make up a giant jar of her delicious pesto sauce for them to take back to their digs.
“We used to call it Red Cross pesto because it was designed to give them something healthy and nutritious to eat. It was so well liked by their student friends that we began making more and more of it and now it’s really taken off and become a mini-business.”
Famous entrepreneur and star of television’s The Apprentice, Alan Sugar, recognised the potential for success in the fine foods market when he invested in the cake making business of 2016 The Apprentice winner Alana Spencer. Her company, Ridiculously Rich, also had a stall at this year’s Llangollen Food Festival, manned by Katie Lancashire.
Katie said: “I love being Alana’s ambassador. To be able to display and sell her delicious cakes in an arena like this is a fabulous opportunity. Llangollen festival lives up to its reputation of being a great event for foodies of all ages.”
The festival has been named one of the Top 10 food festivals in the UK by the Independent and Daily Telegraph newspapers.
Organiser Phil Davies said: “We’re absolutely delighted. It went very, very well. Our exhibition stands were full and included some newcomers to the festival which is always nice to see, and everyone had positive feedback on both the trade stands and the interactive workshops and demonstrations.”
Posted by llanblogger at 6:27 AM