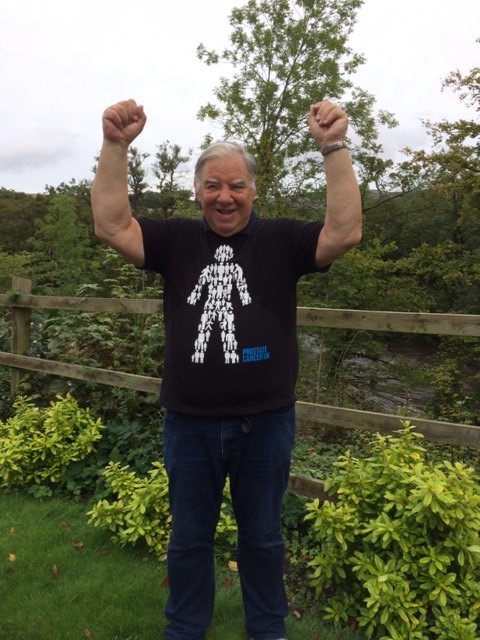 * Ian Parry is jubilant after completing his big walking challenge.

Llangollen's Ian Parry has completed his big September walking challenge to raise cash for the fight against prostate cancer.

Each year, 11,000 men die from this form of cancer and therefore the charity felt that taking 11,000 steps - by walking, running, jogging or even dancing - every day during the month of September would be an appropriate fundraising challenge, with each step being in memory of a life lost this year.

The money raised across the country will go towards research that will help spot prostate cancer sooner with more accurate tests, faster treatments with fewer side effects and emotional and practical support for everyone affected.

Ian has now completed the challenge after completing a total of 406,761 steps and approximately 178 miles during the month.

And that means he has raised a healthy £635 of his target figure, although contributions are still very welcome, he says.

Ian began the challenge on September 1 by walking from his home to Trevor Basin along the canal and registering his 11,000 steps.

He has been recording his daily steps mainly along the canal from the Horseshoe Falls to Trevor Basin, from there towards Chirk and from Chirk to Lion Quays. A couple of days were spent in Chester walking around the city walls and riverside.

* If you would like to support Ian in this challenge by making a donation and helping Prostate Cancer in its research you can do so by visiting the Just Giving website at:  https://www.justgiving.com/fundraising/Ian-Parry9
Posted by llanblogger at 9:42 AM