A Glorious piece of off-key comedy takes the stage 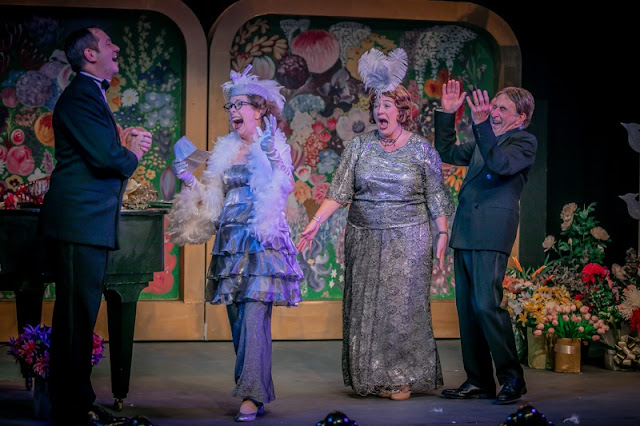 A woman is born with a burning ambition to sing.

The only trouble is she can’t sing.

In fact, she has the kind of excruciating voice that makes grown men weep, dogs howl and music teachers run for cover.

But that doesn’t stop her singing at every opportunity. And if her wretched recitals are in public then so much the better.

Her ambition might have been restricted to very small audiences if it hadn’t been for her daddy leaving her very comfortably off.

She uses tons of his cash to literally buy herself a stage on which her performance dream can take ear-busting flight – and even uses her influence to personally interview potential audience members who she thinks most likely to keep the secret of her chords of discord.

If all that seems a little far-fetched then just Google Florence Foster Jenkins and you’ll see all this is painfully true.

Meryl Streep starred in the film based on her story a few years back and the play on which this was based, entitled Glorious!: The True Story of Florence Foster Jenkins, the Worst Singer in the World by Peter Quilter, is being staged by a superlative amateur cast at Wrexham’s Grove Park Theatre until October 26.

To play someone who sings as badly as Flo you have to be a pretty good singer yourself – remember Les Dawson deliberately and hilariously making a hash of playing the piano?

Luckily, that’s precisely what Helen Belton can do, as she’s proved time and again with the various singing roles she’s had, mainly with Llangollen Operatic Society, over the years.

She needs every ounce of her considerable vocal talent to mangle the notes just like Flo, at the same time as delivering a superb comedy performance.

This piece, set in New York in 1944, is packed with laughter – mainly at Florence’s expense – but the humour is always clever and never too cruel.

Helping the laughs along in a big way is Chris Jones who is excellent as Flo’s resident pianist Cosme McMoon and has a delivery that’s as dry as a bone.

Ade Garrett has a walk-on part as the appalling Mrs Verrinder-Gedge. But her appearance on stage makes quite an impression.

The play is directed by David Underwood.
Posted by llanblogger at 10:08 AM