Businesses contribute £540 for 80-plus steel poppies 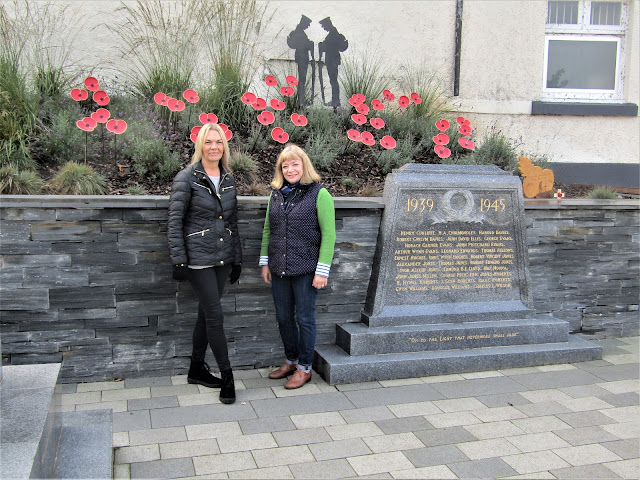 Fundraisers have been on a special mission to raise over £500 to pay for enough metal poppies to cover every name on Llangollen’s two war memorials in time for this year’s Remembrance Day service.

Former town councillor Karen Edwards persuaded three businesses from the area to donate a total of £540 to buy 117 of the Royal British Legion poppies, which is enough to represent every name inscribed on the First and Second World War memorials in the town’s Centenary Square.

With the help of Deputy Town Mayor, Cllr Issy Richards, Karen has spent for the past week carefully arranging the red and black steel flowers in the banking behind the memorials.

They will all be unveiled for the first time on Sunday morning when a large group of bikers visit the square as part of a marathon ride around north Wales to mark the official launch of this year’s annual Poppy Appeal.

Karen said: “With the generous donations from Fouzis cafe bar, Linguassist Translation and Interpretation Services, Lily Rose Interiors, Witzend Gallery and Cornerstones B&B we have managed to raise enough cash to cover the cost of one poppy for every person named on our two memorials and I thank each of them for the kind assistance with this project.

“We will now keep the poppies and set them up in the square in time for each Remembrance Day.”

Just before 11am on Sunday around 40 bikers will gather in the square for the traditional Service of Remembrance which will launch the 2019 Royal British Legion Poppy Appeal.

They are beginning their 180-mile ride in Wrexham and, after calling at Llangollen and other towns along the way, will end up in Llandudno.

The service, at which the local Legion branch will parade standards, will include the sounding of Last Post and Reveille and the observation of the minute’s silence at 11am. It will be led by the Vicar of Llangollen, Father Lee Taylor.
Posted by llanblogger at 11:23 AM