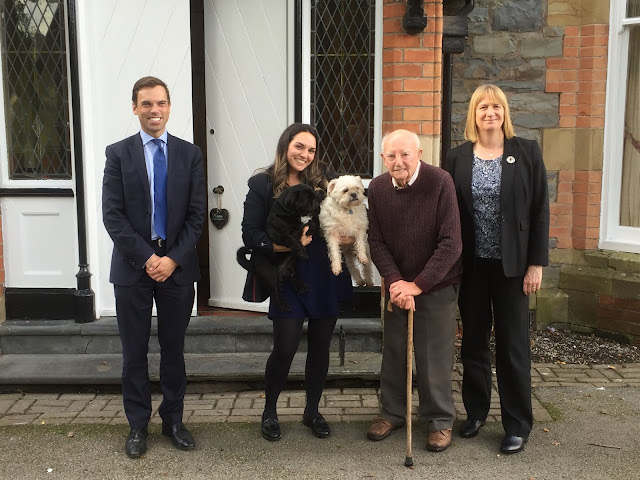 A thriving Llangollen care home was praised after a visit by the Older People’s Commissioner for Wales.

Heléna Herklots and local Assembly Member Ken Skates were welcomed to The Old Vicarage  by director Bethan Mascarenhas, who is celebrating a successful first year after taking over the home with brother Richard in October 2018.

Bethan, who studied at Ysgol Dinas Bran in Llangollen, said: “It was great to have Heléna come and visit, it meant a lot to the residents that we were able to give back for all the work she does on their behalf.

"We celebrated our first year of running The Old Vicarage on October 10, so it was amazing to have Heléna come and celebrate alongside us.”

Ken Skates said: “It was fantastic to visit The Old Vicarage and have such a friendly welcome. There is a wonderful warm atmosphere at the home and it’s clear to see the brilliant relationships residents have with the staff.”

Bethan added: “In a national care home review the previous commissioner said the word home ‘should mean something special, a place that we hope will be filled with friendship, laughter and love’. This is true of The Old Vicarage and we hope that Heléna felt that sense of warmth.

“It was interesting to chat about ageism within our society and how it affects those in and out of our care. At The Old Vicarage, we choose a culture of positive risk-taking, against being risk averse and wrapping people in cotton wool because they are seen as ‘old’ or ‘frail’.

“I recently watched a video online of a 102-year-old lady skydiving and that was a real breakthrough moment for me - I thought ‘why not?!’ Just because people are older doesn’t mean they have to stop trying new things and that’s something we wish to promote as a home and work with Heléna on.

"We have already started some intergenerational projects to try and bridge the gap and see how much we have in common. We hope that today will be the start of a strong relationship with Heléna and the work that she does.”

Heléna Herklots said: “I want to thank the residents and staff for giving us such a warm welcome to their home and for taking the time to talk to us about their lives and experiences. It was great to see the residents enjoying a fantastic afternoon tea and celebrating one year of the home’s new management.”

Mr Skates invited Mrs Herklots to Llangollen, where she also visited the local health centre to hold a round-table discussion with representatives from the health and care sectors.

He said: “It was great to welcome Heléna to Clwyd South and I’d like to thank her for taking the time to visit our area. It was a very productive and enjoyable afternoon.”

Heléna Herklots was named Older People’s Commissioner for Wales in June 2018. She was previously chief executive of charity Carers UK. She has more than 30 years' experience of supporting and working with older people and was awarded a CBE in 2017.
Posted by llanblogger at 10:16 AM