New Insignia holds its own against premium crowd 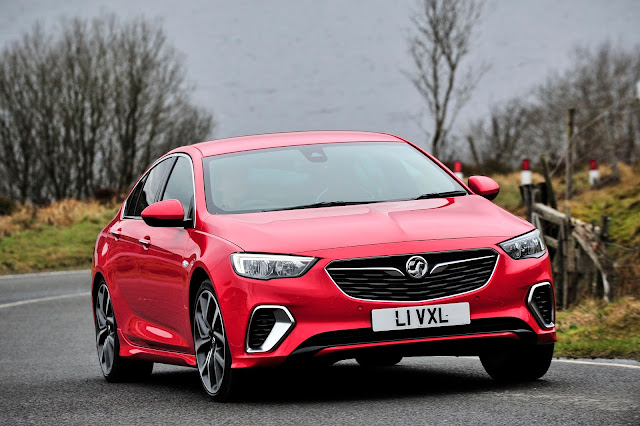 The first words to come from my wife after driving the Vauxhall Insignia were 'how much does this car cost'?

All but £39,000 says I. 'What! she says with the irritated tone of Maggie Smith's Dowager Countess in TV's Downton Abbey. 'It hasn't got a reversing camera'.

The conversation descends into 'of course it has' - 'no it hasn't' verbiage before I go out to check and find she is right. This is a very strange omission given the Grand Sport's price tag. It will be in the options list but what is more useful, a heated steering wheel or a rear camera?

Camera aside this is one swanky Insignia now with Grand Sport added to its title to signify hatchback, and what a difference from its predecessor.

British designer Mark Adams has taken full advantage of Insignia's new platform to give it a sleek coupe silhouette. The car is not that much longer but an extended wheelbase and shorter overhangs gives it real presence, and more importantly Adams has managed to sort out Insignia's snout which was its least attractive feature.

With slimmer headlights and a lowered grille, that protrudes rather than inclines, Insignia has turned into a very attractive car even capable of taking a pop at some of its premium brethren.

Looks alone won't do it but a lot of work has gone into improve the handling, comfort and cabin space. Rear legroom was an area where the old car fell down but the extended wheelbase has enabled the designers to find more inches and although it still can't match Skoda Superb there is no longer cause for complaint.

The all wheel drive GSi is the latest and most expensive model in the range, powered by a 2-litre biturbo diesel mated to an eight speed automatic box. Apart from the rear camera it has just about everything you could ask for.

The GSi is more for the enthusiast but it is no VXR and there will be no performance tuned model for Insignia. But stiffer suspension, beefed up steering and a moderately powerful biturbo at least gives it a sporting edge.

Vauxhall has introduced torque vectoring for the all wheel drive system, others have been using it for a while and it is more sophisticated sending torque to the outer rear wheel during cornering and sort of steadies the ship. The bottom line is more confidence in cornering particularly in the wet.

A big effort has been made to make the cabin a more pleasant place with soft touch materials and very stylish sports seats in the GSi which give great side support. There is a good flow to the dashboard with a central 8in touchscreen for navigation, phone etc, although heating and radio control switches are separate and easy to use. Voice control can sort out most functions if you want to keep your eyes on the road.

The head up display is one of the best I have seen and the driver can toggle between a variety of functions. One day this will be a standard feature on all cars and the sooner the better.

Even though it's diesel the GSi will not be that cheap to run. The long term trip computer showed it had averaged 35mpg over nearly a 1000 miles and the best I could do was 36mpg which is in line with the official figure. And the first year's road tax is a whopping £1,280.

People might be opting for SUVs and crossovers but Insignia is an important car for Vauxhall and its new owners PSA.

The Peugeot is a worthy rival but is not as roomy and will never sell as well in the UK as a Vauxhall which will be snapped up by the fleet suppliers because it is good value for money.

But please Vauxhall, fit a rear camera as standard on the GSi, if only to shut my wife up! And while you are at it, the automatic handbrake needs a hold function.