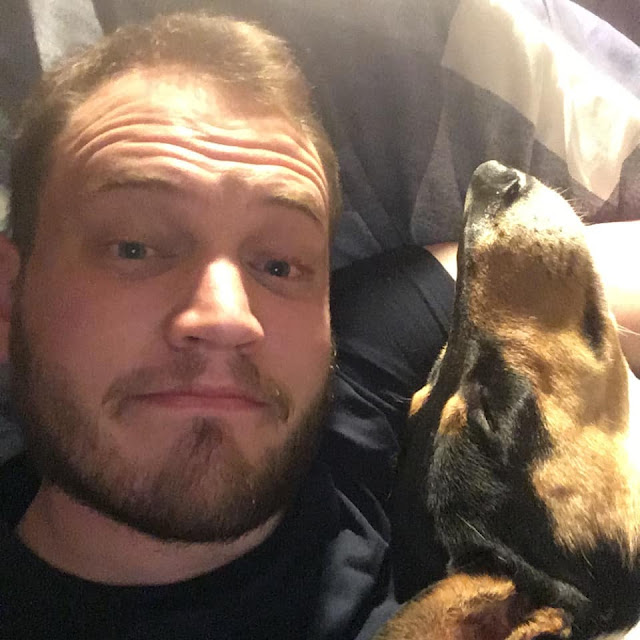 * Joel Whitaker and his dog Ralph.


A medic who warned bikers visiting Llangollen of the dangers of speeding has issued a plea for help with looking after his pet dog when he moves to the area himself.

Back in the summer Joel Whitaker put out a heartfelt plea to bikers on Facebook after seeing a number of them almost have head-on collisions as they rode on the Horseshoe Pass.

He said at the time: “I make no apologies for this rant but I say it because I, as a medic, am fed up of having to scrape motorcyclists off the road and tell family members that turn up on scene that their loved ones are dead.”

Joel also told llanblogger: “I am based in Aylesbury, Buckinghamshire but moving to Llan shortly and have family up here. Historically from the area: I’m a descendant of Billy Meredith.”

Now he’s been back on Facebook to ask for help with looking after his dog when he moves to north Wales.

And he says that if he gets no assistance he won’t be able to come to Llangollen.

He says: “Some of you may remember that I was looking to move up to Llan earlier in the year. This is still my plan however I have hit a bit of bother.

“I am in the ambulance service and my station is down in Buckinghamshire. I work generally four shifts on then four off.

“I need to find someone that would be willing to have my dog Ralph for my four days on duty. He is a Smooth Collie, three years old who is very loving and a joy to have around.

“He is an assistance dog as I have Tourettes/Autism but I am not allowed to take him to work or I’d have him with me down there too! This is the only thing stopping me moving. Any help would be greatly appreciated!”