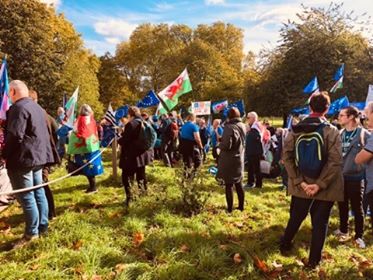 * Welsh campaigners gather before the march. 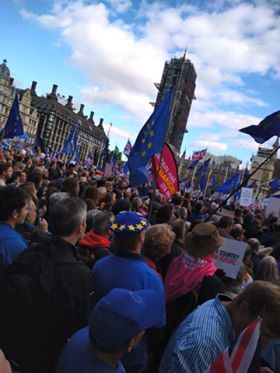 * The march through London.

Campaigners from Llangollen were among the one million people estimated to have taken part in the People’s Vote Together For the Final Say march through central London last Saturday.

Protestors travelled from all over the UK by car, bus and train to take part in the march.

Of the 172 organised coaches, 17 of them – a full 10% - were organised by Welsh grassroots groups across Wales, including Denbighshire whose party the Llangollen group joined.

Many thousands of others travelled by train and hundreds of Britons living in other European countries and across the world flew back to the UK to demonstrate their support for a People’s Vote.

The Welsh groups held a rally with singing and speeches before the start of the main march through London. Many of those taking part were from areas of the Wales which had voted leave in the 2016 Referendum, including Wrexham.

Those taking part included several generations of the same families, war veterans and pensioners in their 90s.

"Aled", chairman of Denbighshire For Europe, said: “ It was great to see all people from Wales and North Wales and even Denbighshire.

"It was good to see people from all regions within the Denbighshire area showing support to the MPS that support our case that a second referendum (People’s Vote) is the only way forward.

"The public deserves to have the chance to vote against the deal and a option to remain if they do not like the deal, also having the right to change their minds as well."

He added: "It was good to see coaches sold out picking people up from Llangollen and Corwen and all regions in Denbighshire that feel the same, that we should have a People’s Vote on the final deal with truths and facts on leave the deal against the the option to remain if people now want to remain in the EU."

At the rally in Parliament Square, "Silas" from North Wales for Europe spoke on behalf of grassroots campaigners in Wales.

He said: “Three years ago, very few politicians would listen to our calls for a People’s Vote, but they’re listening now. We don’t have the media presence that Brexiteers have, so we must use our numbers and get out and talk to people.

"Most people are reasonable, they’re not hard leavers or remainers, they just want the best future for their children and grandchildren. We are sharing our positive vision for the future with them.”

Campaign leaders say that since the march, hundreds of thousands of people have signed a letter to "the powerful" as part of a new campaign, demanding that the people are given the final say on Brexit in a referendum.

Before the final Brexit deadline of October 31 the letter will be delivered to Downing Street and the Houses of Parliament, as well as the European Parliament to other European Heads of Government.
Posted by llanblogger at 3:11 PM