The On The Edge Trials Stunt Display Team will be performing amazing feats of skill and daring on both days of the Llangollen International Motorcycle Festival - LlanBikeFest 15 – on August 1 and 2.


Billed as the world’s best stunt riders, the team is led by Jack Challoner and Martin Crosswaite, who between them have won multiple British, European and world trials championships. 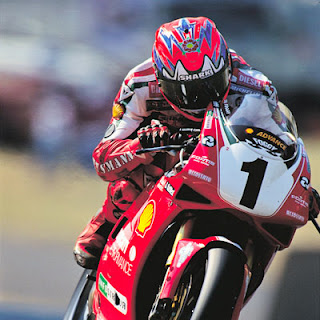 Their show includes 15ft jumps up vertical walls, amazing ‘drop offs’ and a range of freestyle tricks, some of which can only be attempted by a handful of riders throughout the world.


Show organiser Harry Edwards, who is out of hospital and recovering well after a bike accident, said: “These guys are a must-see, but LlanBikeFest 15 will be a real family event with something for everyone, not just bike fans.”


Attractions will include live bands, a vintage funfair, face-painting for kids of all ages by Glitterbugz and the opportunity to meet and handle some beautiful birds of prey with Rockcliffe Raptors.


The show will be opened on Saturday, August 1 by seven-times TT winner Mick Grant and Carl ‘Foggy’ Fogarty MBE, (pictured above) the most successful World Superbike (WSB) racer of all time.


On Sunday, August 2, more than 100 classic trials machines will compete in a stage of the Northern British Bike Pre-65 Trials Championship (NBBC).


All of the bikes are at least 50 years old and will be ridden on the Llangollen Pavilion show site from 11 am to 2pm, as part of a championship round hosted by Llangollen and District Motorcycle Club.


The Llangollen site has previously hosted successful bike shows – the last in 2011 – but LlanBikeFest 15 is being organised by a new team of local motorcycle enthusiasts, led by Harry Edwards.

He said: "As a life-long biker I welcome this event to the Pavilion and hope it goes well and that we can add it to the list of annual events that are taking place at this superb venue."