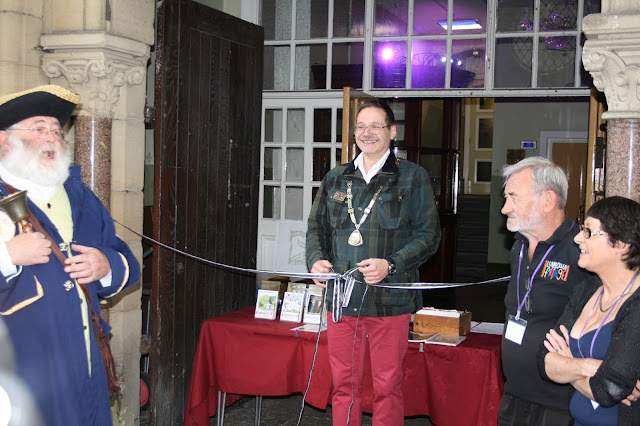 Graham Timms says that despite the festival, currently in progress at various venues in the town, bringing £150,000 into the local economy, its success is being hampered by both the town and county councils.


And Graham Timms believes that without more support he does not see how it can survive.

Over the past two decades big names who have taken part include Lesley Garrett, Rhys Ifans, The Damned, Cerys Matthews,  Tracey Emin, Damien Hirst, Juan Martin, John Cooper Clark and Will Self.

“Denbighshire County Council and Llangollen Town Council are strangling the Fringe Festival by their inflexible attitude and the rigid enforcement of minor bylaws.
“We always try to make the town feel special during the festival with street art, banners and posters, but this year we have been told by Denbighshire that we cannot  attach anything to their  - or is it our - street furniture.

“This led to the near invisibility of our promotion in the town in the previous week, whilst the international eisteddfod was held, and a resulting loss of ticket sales.


“We were told that signage on the approach roads had to be placed in less prominent positions and attached to trees instead of street furniture.
“For the last few years, whilst our festival has been growing, signs have been attached to lamp posts to promote the Fringe Festival. I understand that regulations are necessary, but in this instance it is strangling the fringe.”


Mr Timms added: “We ordered hundreds of pounds worth of publicity and signage and Llangollen Town Council told us that nothing was permitted to be attached to the outside of the town hall because it is a listed building.
“We’ve wasted money on publicity that cannot be used and we’ve lost vital income as a result.


“After the first day of this year’s festival we were contacted by Llangollen Town Council to remove our professionally installed lighting in an exhibition in the town hall entrance and replace it with fluorescent lighting and be charged for the privilege.
“Even though the four directors of the not-for-profit festival are financially liable for any losses and I personally feel that we are risking too much as individuals without getting any flexibility from the town hall, who see us just as an income stream or the county council who have to employ enforcement officers to check we haven’t put any signs up.”


Mr Timms went on: “The Fringe brings £150,000 into Llangollen’s economy, according to formal events impact calculations submitted to the Arts Council of Wales. Unless we get more support, I cannot see how we can survive.
“In its 18th year, the Fringe currently has the most ambitious and expensive programme ever.


“I urge local people to come and support the huge range of events that are on in the town to ensure the festival’s continued success.”

"The purpose was to stop the proliferation of banners that were being fixed to above the front entrance of the Town Hall which were detracting from the appearance of the listed building.


"However, the Friends of Llangollen Town Hall are looking at a new system of vertical banners to identify the main entrance of the building that will be available to other users.  Given the status of the building these have to be designed appropriately and must not detract from the quality of the listed façade.

"This has not prevented the weekly Country Market, the Twenty Club, The Llangollen Operatic Society or The International Musical Eisteddfod from adequately promoting events in the Town Hall, it is simply a matter of using appropriate banners that do not require permanent fixings attached to the walls of the Town Hall.
"In respect of the comment, `After the first day of this year’s festival we were contacted by Llangollen Town Council to remove our professionally installed lighting in an exhibition in the town hall entrance and replace it with fluorescent lighting and be charged for the privilege,' this is not the case.

"Contact was made with the fringe as somebody had placed plastic film over the Town Hall lights in the foyer and under the upstairs balcony and had disconnected one set of lights.  Hirers should not interfere with the fixtures of the Town Hall and the initial thought was it had been done by the technical team of the fringe.
"This however has proved to be wrong as the works were undertaken by another user associated with the Fringe, who has rectified the situation and has apologise for interfering with the Town Hall's fixtures and fittings.

"The Town Council clearly supports the Llangollen Fringe, but equally it has a responsibility to manage its assets to ensure that the fabric of the building is maintained to a high standard given the significance of the Town Hall, and its designation as a listed building, in the centre of the town’s retail area."

A Denbighshire County Council spokesperson said: "The council understands that the fringe festival is important for Llangollen, and we are therefore happy to work with the organisers on an agreed signing layout.   However, the council also has a duty to make sure that road users and pedestrians can use the highway safely, and we these two objectives can sometimes be in conflict with each other.

"We are keen to support community events like Llangollen Fringe. We recognise that running an event is a very complex process and we need to make sure we are providing easy to access, clear guidance on publicising events.  We have therefore set up a toolkit to help advise event organisers to make sure the advice and guidance is crystal clear for people."
Posted by llanblogger at 7:00 AM