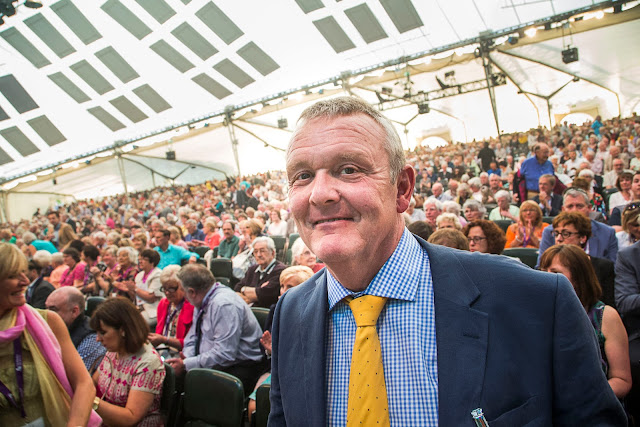 * New Eisteddfod chairman, Dr Rhys Davies.
A doctor who's taken over the helm of the Llangollen International Eisteddfod says the prognosis for the future of the iconic festival is excellent.
Dr Rhys Davies was elected chairman at an extraordinary general meeting succeeding Gethin Davies who has stepped down after many years' service.
During this year's event a £70,000 appeal was launched to cover predicted losses due to disappointing ticket sales - and more than £40,000 has rolled in already.
Planning for next year's event is underway and classical singing sensation Katherine Jenkins has been announced as the headline star of the opening night when she will perform all the arias from the opera, Carmen.
Rhys, 59, a well-known local GP in Llangollen like his father before him until his recent retirement from daily practice, said: “In medical terms I’d say that the Eisteddfod is in recovery and the prognosis is excellent.
"We're very much looking forward to our 70th Eisteddfod next year and it's shaping up to being one of the best ever."
Born and bred in Llangollen where he still lives, Rhys says he has been coming to the annual festival every year since he was a “babe in arms”.
His late father, Dr Jack Davies, practised as a GP in the town for 30 years from 1955 and for many years the family home was just on the edge of the Eisteddfod field at Dolafon Villas, close to the old Cottage Hospital.
Rhys, who now lives with his family at Pentrefelin House since his parents passed on in the mid 1990s recalled: “We were so close to the field at Dolafon that we could just step out of our garden and into the Eisteddfod.
“From being a little boy I volunteered at the festival, as a messenger, programme seller, an usher and steward.
“University and my job took me away from the area for some years but I still returned each year for the Eisteddfod until I returned to live and work Llangollen in 1984 – eventually becoming senior partner at the local GP practice.
“In those days we used to provide medical cover for the festival but we haven’t done that for some time now.
“I became a member of the grounds committee and eventually its vice-chairman.
“Recently I was co-opted onto the board of the Eisteddfod and earlier this year I became vice-chairman.”
Rhys added: “I’m taking over as chairman from Gethin Davies following his retirement. Gethin has done an excellent job.
“With our well reported financial problems I know it’s not the easiest time to be coming in as chairman but I’m looking forward to the challenge.
“To ensure that Llangollen goes from strength to strength, I’ll be working very closely with our chief executive, our musical director, the standing board and, crucially, our small army of 800 volunteers without whom the Eisteddfod just couldn’t happen.
“We have a three-year plan and we will also be working with the Welsh Government and other organisations to obtain further financial support.
“The appeal we launched just before this year’s festival has already had a good response and we have lots of other ideas for raising money.
“The response we’ve had from our volunteers has also been amazing and very humbling for me.
"The announcement of Katherine Jenkins as the star of our opening night has caused a huge amount of excitement and tickets are selling like hot cakes - I'd advise anybody who wants to be there to buy their tickets as soon as possible."
Rhys, who is married to Ann, a nurse, and has a grown-up son and daughter, stressed that conditions under which the Eisteddfod had to operate were very different now to its early days almost 70 years ago.
He said: “Back in 1947 when the Eisteddfod was first held there wasn’t anything else like it.
“But over the years things have changed and we now face stiff competition from many other festivals in terms of attracting competitors, the very best performers from around the world and audiences. We need to market the festival afar, but also to potential audiences within an hour or so of Llangollen.
“However, we have to go in the face of that competition and continue to secure the future for what is a truly unique festival.
“I will be doing my very best to see that happens so that the magic of the Llangollen International Musical Eisteddfod lives on for many generations to come.”
Posted by llanblogger at 11:01 AM