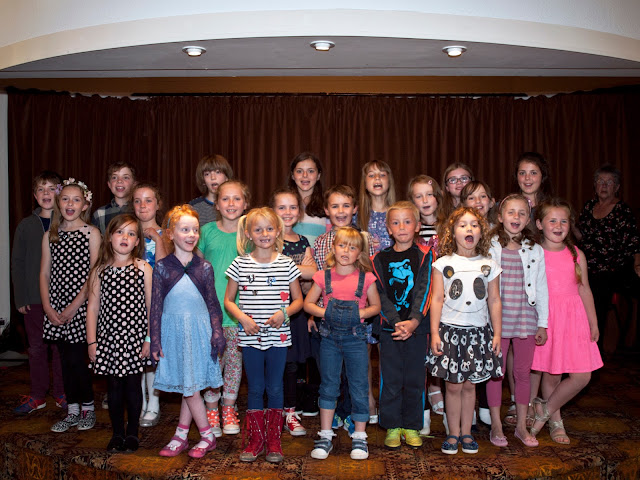 * Members of The Young 'Uns during their performance in the RAFA Club.

LLANGOLLEN Operatic Society’s junior section, The Young ‘Uns, has announced that its next show will be the musical Honk!

With music by George Stiles and book and lyrics by Anthony Drewe, it is based on the story of The Ugly Duckling by Hans Christian Anderson.

The recipient of an Olivier Musical Award, this heart- warming show was first performed by The Young ‘Uns 13 years ago and members are now excited about reprising it with a new cast and crew.

Producer Pamela Williams said: “We are all really looking forward to getting started with this show.

“It’s incredibly funny and is guaranteed to charm all who come to see it.

“We are actively looking for children aged 11-18 who would like to join in the fun, particularly boys, as some of previous members have now left us to move on to university.

“We currently have a waiting list for 6-10 year olds but anyone wishing to join should please still get in touch so we have your contact details for the future.

“Similarly, we would love to hear from anyone, of any age, who might be interested in getting involved on the production side, designing and building the set, organising and making costumes or helping in some other capacity. It’s always great to get new faces on board.”

Honk! will be performed at Llangollen Town Hall from February 4-6 next year.

Over the past five weeks, members of The Young ‘Uns production team, assisted by friends of the society, have run a series of workshops for children aged 6 to 11 years, with the aim of developing performance skills and building confidence.

The workshops included drama games, group story telling through mime, character development and singing and culminated with a performance of songs and more for family and friends on the evening of Monday July 13 at Llangollen RAFA Club.

Every child was rewarded with a certificate for their teamwork and commitment.

The team involved in the workshops and performance included Pamela Williams, Dee Smith, Helen Belton and Alison Jarvis.
Posted by llanblogger at 6:54 AM