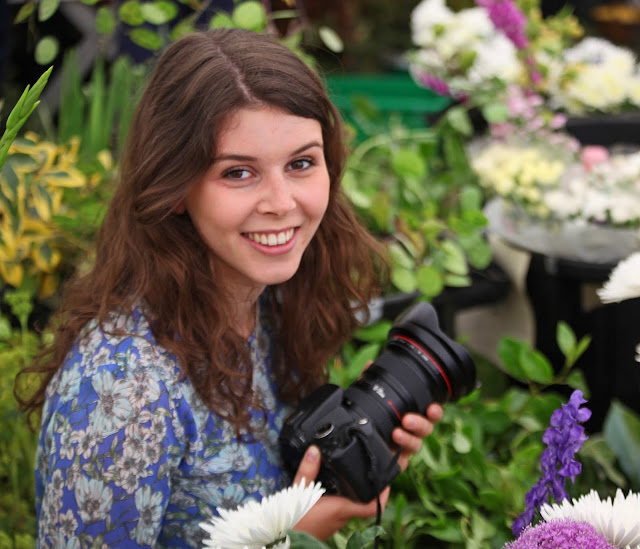 * Millie with her camera at  the Eisteddfod.
A teenage volunteer at the Llangollen International Musical Eisteddfod has won a prestigious national photography competition run by the Sunday Times.
Millie Adams Davies, from Llangollen, had her winning photograph on display at the Eisteddfod where she has been a volunteer since the age of 11.
The 19-year-old won the Sunday Times competition for amateur photographers with an image entitled Ladies Who Lunch, taken in La Paz while she was travelling through South America last year and has already been printed in the newspaper.
It is quite a coup for Millie, who was brought up with the Eisteddfod - her parents are season ticket-holders and her dad, retired local GP Dr Rhys Davies, is currently vice-chairman of the event.
As soon as she was old enough to get involved herself, Millie jumped at the chance to join the 800 volunteers who make sure the musical extravaganza runs smoothly every year.
She said: “I’ve been to the Eisteddfod every year of my life. It’s on our doorstep and Mum and Dad always took me so as soon as I was 11 I wanted to join in. 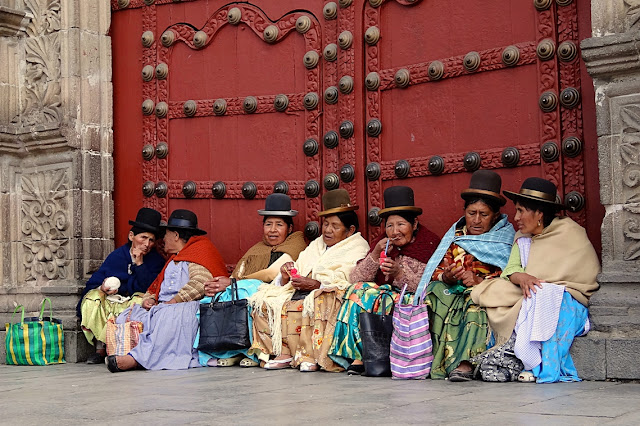 * Millie's prize-winning picture of Bolivian women sitting
on the steps of the San Francisco Cathedral.
“I was an usher for my first year and then joined the floral committee who I’ve been helping ever since.”
In the intervening years Millie left Ysgol Y Gwernant, completed her secondary schooling at Moreton Hall, travelled extensively during a gap year and started studying medicine at Cardiff University.
Millie ended up spending much of last year in South America. She started by visiting her brother who was living in Chile at the time and went on to spend seven months in the region.
She said: “I stayed with my brother for Christmas and then I went on to Santiago to do a Spanish course for a month.
“After that I joined a conservation project in Peru and basically spent nearly three months chasing butterflies and catching lizards in a remote part of the rainforest you could only get to by boat.
“It was an amazing experience and completely different. After that I did a bit more travelling through Bolivia, Argentina and back to Chile.”
In the course of her adventures Millie took thousands of photographs and even had one of them printed in the Sunday Times recently.
She said: “I was reading the travel section, as I always do, and spotted this photographic competition. I had taken so many pictures, but my favourite was one of a group of Bolivian women sitting on the steps of the San Francisco Cathedral in La Paz so I just thought I’d send it in.
“I got an email at the end of the week saying I was that week’s winner and I’d get £250 vouchers to spend on photographic equipment.”
This comes as good news for Millie as her trusty camera took quite a beating on her travels as she went sandboarding, enjoyed mud fights, dropped it on the Machu Picchu trail and repeatedly covered it in sand.
Now able to buy a new one, Millie is happily planning this summer’s travels through Europe, once she has finished her ninth year as stalwart of the International Eisteddfod.
Once again she helped organise the floral stage arrangements that the festival is famous for as well as selling posies and baskets of flowers.
Millie said: “I really enjoy it. I take time out to do it every year and you always meet up with the same people again which is lovely.
“It’s a really good time to practice my Welsh too as I used to be fluent when I was little and then it dropped off a bit.”
Over her years working behind the scenes at North Wales’s premier music event, Millie has also bumped into all sorts of celebrities.
She said: “A lot of people like to come to the floral tent so you end up having all sorts of random chats with quite famous people like Terry Waite and people from the television.
“I once had to go on stage to present a bouquet to Sir Willard White which was really cool, and I got to buy a new dress too!”
Despite her passion for music, Millie has followed her parents’ career paths and just completed her first year as a medical student in Cardiff.
She said: “Mum and Dad are both medical professionals so I started out saying I wanted to do anything but that – be an astronaut even, anything just to be different.
“But after a while I had to give in and admit it was all I was interested in. I’d quite like to work in surgery and I’m definitely going to spend some time abroad with Medecins Sans Frontieres as I think they’re a great charity.”
Gethin Davies, Chairman of the Eisteddfod, said: “We’re really grateful to Millie and all the rest of our volunteers – the event just wouldn’t work without them.
“It’s wonderful that she has won this competition too so she obviously has a range of talents, not least in the floral department where we always have an incredible display.”
Posted by llanblogger at 6:52 AM