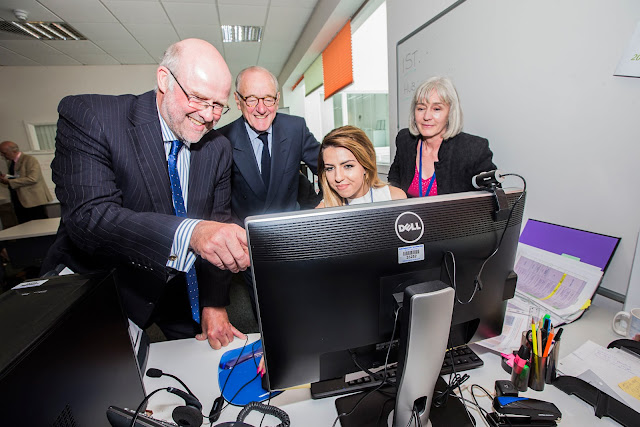 * From left, Deputy PCC Julian Sandham and PCC Winston Roddick
with staff of the new Victim Help Centre.
A WOMAN who worked on the original ChildLine founded by Esther Rantzen and went on to head the charity in Wales in now running a new service to help victims of crime.
The fully bilingual Victim Help Centre, established by the North Wales Police and Crime Commissioner Winston Roddick CB QC, went live on July 1 and aims to improve the way victims of crime are looked after in the region.
The centre creates a one stop shop for victims by bringing together the support services of North Wales Police, the Witness Care Unit of the Crown Prosecution Service (CPS) and the former Victim Support organisation.
Each victim will be given a response specifically tailored to their situation.
From its base at police headquarters in St Asaph the integrated service will cover the whole of North Wales.
Mr Roddick, along with his deputy Julian Sandham, paid a visit to the centre and described it as “a triumph for North Wales.”
In charge of the dozen staff and 30 outreach volunteers operating the service is Julie Elliott who joined the original Childline team in 1987 as a counsellor soon after it was set up by TV presenter Esther Ranzen  to provide a free confidential phone service on which young people could talk over issues such child abuse and bullying.
In 1994, Julie joined the staff of Childline Cymru when its North Wales base was in Rhyl and helped establish its bilingual service.
Eight years later she was appointed as director for the entire Wales organisation, taking control of 25 staff based at both the Rhyl and Swansea headquarters in South Wales along with about 300 volunteers throughout the country.
Julie recalled the early days with Childline and said: “I was privileged to work alongside Esther Rantzen for 25 years as part of the team.
“She is a very committed and professional person who is also very child centered.
“It was a masterstroke to set up the Childline service. All the experts told her it couldn’t be done but she proved them wrong.”
Julie believes that the new North Wales Victim Help Centre has much in common with Childline.
She explained: “They are both about helping and empowering the people who use the service and making a difference to their lives.
“Since the Police and Crime Commissioner announced his plan to open the centre earlier this year we have been busy getting everything ready for going live.
“We have 12 staff in the centre who have all been trained to the very highest standard to deal with any situation they might have to deal with from the victims who get in touch with us.
“Outside the centre, we have a network of about 30 volunteers in communities across North Wales, which works as an outreach team.
“Where a person has been the victim of domestic violence, for instance, they can help with things such as moving them out of the home where the abuse has taken place.
“They can also give assistance with contacting employers and schools, writing letters, making insurance claims and claims for criminal injuries compensation.
“The six victim care officers based in the centre come from a range of previous jobs such as the education field and other care organisations and a number are criminology graduates.
“They have been training hard for the past six weeks and they just can’t wait to begin the service.”
One of victim care officers poised to offer help and advice is 22-year-old Jasmine Jones from Llanfair PG on Anglesey.
After obtaining her criminology degree from Bangor University she worked with Young Carers Gwynedd and sees her role at the centre as an exciting new challenge.
Jasmine said: “This is a really positive step in my career and I’m really looking forward to the job.
“We’ve all been training very hard and learning to handle every type of situation.
“I see my role as providing a sympathetic ear to victims and signposting them to the people can give them the most appropriate help.
“It’s fantastic to be part of such an important new service which is a first for North Wales.”
After touring the centre and meeting staff, Winston Roddick said: “It’s a real triumph for us to have established a victim centre of this kind and it starts from scratch.
“It’s a huge undertaking and has been a real challenge but meeting them I’ve seen the enthusiasm there is for it amongst its staff.
“And when you bring enthusiasm and understanding to a serious problem you solve it and that’s what they’re going to do.”
Mr Roddick added: “There are a lot of victims out there whose problems need care and attention of the kind that only a centre of this sort can provide.
“We are taking a huge step forward in demonstrating how concerned it is for the well-being of victims.
“We want them to feel confident that they can come forward and share their concerns and seek help because if they don’t do that then nobody can do anything for them.
“The experience our new manager Julie Elliott brings to the job from Childline is highly relevant because while adults can have difficulty in making complaints about the kind of matters to be dealt with in the centre, it’s more difficult to get children to articulate what’s happened to them.”
The new victim help service is available from 8am-8pm Monday to Friday and 9am-5pm on Saturdays.
* It can be contacted by Freephone on 0300 3030159, by email at: northwaleshelpcentre@victimsupport.org.uk, or via the websites www.victimhelpcentrenorthwales.org.uk (English) or www.canolfangymorthiddioddefwyrgogleddcymru.org.uk
Posted by llanblogger at 6:55 AM