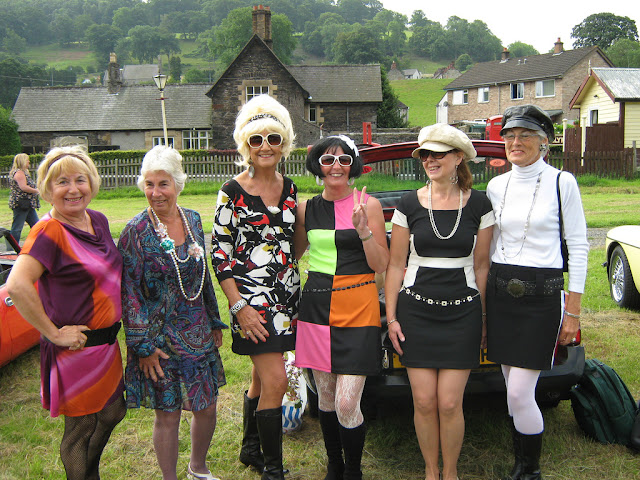 * Railway staff get into the swing of a previous 60s weekend.

Llangollen Railway will be staging its sixth 1960's weekend On July 24-26.

Organisers say there's lots of 60's themed things to enjoy all along the line over the weekend and they are encouraging visitors to join staff in dressing up in outfits from the era.

Dr Beeching's Bar in the Robertson Suite at Llangollen station will be open on Friday evening, Saturday from 12 until late and Sunday.

Eight local real cask ales will be on offer at £3 a pint along with Wrexham lager, wines and cider.

The railway is  running a 1960's-themed pub quiz at around 8.30pm. Entry will be £5 per team with all proceeds going to boiler repairs for Foxcote Manor, the line's flagship steam locomotive.

There will be live music performed on the platform during Saturday afternoon and evening, from 7-10pm.

Entry is free and burgers from the station restaurant barbeque will be available.

Further up the line, Berwyn station café will be open and alighting from the train here provides quick and easy access to the recently reopened Chain Bridge, now resplendent after a full restoration.

The popular and free "rail replacement" vintage bus service will be running between Llangollen and Corwen during the day, also calling at Berwyn and Glyndyfrdwy - where there is a large vintage vehicle rally of 60's era cars and other vehicles.

A café in the station will be serving tea and cakes.

Anyone with a vintage car from the 1960s or older is welcome to bring it along to display and will receive complimentary travel on the railway for the event.

Carrog station tearooms will also be open, which is a good spot to get off the train for a cuppa, cake and a walk around the village with its spectacular views and the Grouse pub.

Throughout the weekend the railway will be running an intensive timetable of vintage trains - with  steam locomotives temporarily weathered to look grimy and unloved, as they were in the 60s as many branch lines, including Llangollen, were closed and steam traction was replaced by diesels and railcars.

Two diesel locomotives and a railcar will be in use over the weekend to demonstrate the "new order" - though they themselves are all now over 50 years old and have been replaced by more modern electric and multiple unit trains on the railways of Britain.

The historic autotrain will also be used, which sees a pannier tank steam locomotive sandwiched between two coaches.

* To see video of highlights of the railway's last five events go to: https://www.youtube.com/watch?v=-cYAi5UMTC0
Posted by llanblogger at 6:21 AM