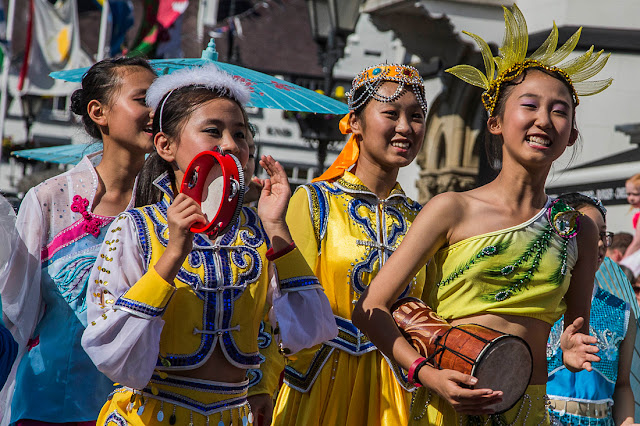 * The Eisteddfod attracts competitors and visitors from across the world.
An urgent global appeal is being launched secure the future of the Llangollen International Musical Eisteddfod.
Organisers are hoping to raise £70,000 because this year's event is heading for a financial loss as a result of disappointing ticket sales.
With the 70th anniversary on the horizon, they are confident the event has a bright long-term future but say they need the cash to get over their short-term difficulties.
Supporters wishing to make a donation will be able to do so online via the Eisteddfod's website or by using Gift Aid envelopes that will be available at all the concerts during the week.
This year will be the 69th year the festival will have been held consecutively since it was founded in the aftermath of the Second World War to promote peace and harmony.
The iconic event has now grown into one of Europe's premier music and dance events, where "Wales meets the world" and the town of Llangollen is turned into a cultural melting pot.
Over the years it has attracted cultural icons like Luciano Pavarotti, who first took to the Eisteddfod stage as part of his father's choir from Modena in Italy in 1955 before making a triumphant return in 1995 when he was a global superstar.
This year competitors are expected from as far afield as Ghana, China, Hungary, India, Jamaica, Morocco, Nepal, Slovakia and Holland as well as from across the UK and Ireland.
The Prince of Wales and the Duchess of Cornwall will be there tomorrow (Tuesday) when they will meet competitors taking part in the colourful Parade of Nations.
The appeal was announced by long-serving Eisteddfod chairman Gethin Davies who first attended the event as a young boy in 1951.
He said: "The Eisteddfod is an expensive festival to put on, and, like many other festivals, we have been walking a financial tight-rope for some time.
"By making swingeing economies in our expenditure, we managed a small surplus in 2014.
"Sadly, although the economies set in motion in 2014 have continued in 2015, the disappointing sale of tickets for the concerts of this year’s Eisteddfod means that we are looking at a deficit of around £70,000 for 2015.
"We are working with the Welsh Government regarding short-term assistance, but as yet they can give us no assurance of help.
"Their advice was to make strenuous efforts to raise funds from our supporters in order to meet what is essentially a short-term problem.
"The Eisteddfod board has submitted a three-year business plan to the Arts Council of Wales and is confident that if we can weather the present difficulties we can move into profit.
"The Music Director has set out an extremely attractive concert programme for 2016 - including a household name - which we are confident will attract larger audiences, and the preliminary budget for 2016 shows a reasonable surplus.
Mr Davies added: "The International Eisteddfod has been a very important part of my life since 1951, when, as a small boy, I sold programmes for the Eisteddfod.
"Over that period of 65 years, I have built up a treasury of happy memories of the wonderful competitors I have seen, the amazing concerts I have attended, and the incredible warmth, knowledgeability, friendliness and good will of the audience.
"My children have also shared many of those experiences, and I would like my grandchildren, likewise to be able to enjoy this unique festival, and I am confident they will have that opportunity."
People who wish to make a donation can do so via the Llangollen International Eisteddfod's website: www.international-eisteddfod.co.uk
Posted by llanblogger at 6:59 AM