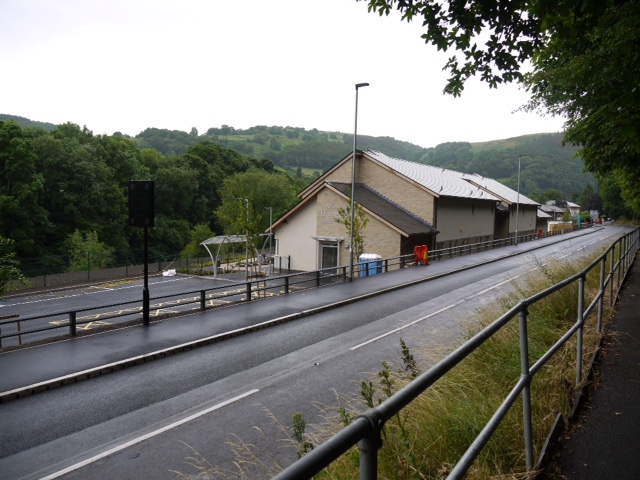 * The new health centre which is due to open on August 24. Picture: Mike Edwards.

The state-of-the-art centre is being built by Brymbo-based Read Construction, which has won the praise of their AM as well as a raft of positive comments from residents and businesses in Llangollen.

Mr Skates said: “The contractors have done a fantastic job and built what looks certain to become a huge asset for Llangollen. It’s very impressive.

“The facility has taken shape rapidly over the past few months, and it’s important that something on a main route into the town like this looks good – and this certainly does.”

Mr Skates was told this week that services are scheduled to transfer to the new centre on August 24, and also welcomed the news an open day will be held for the public on July 30 to allow residents a sneak preview.

He added: “It is extremely positive news for Llangollen that Betsi Cadwaladr, local practice and Welsh Labour Government have worked together to create a modern healthcare facility fit for the 21st century and fit for the people who live here.”

Mr Skates is meeting Betsi chairman Dr Peter Higson and interim chief executive Simon Dean later this month after the Welsh Government moved to address concerns over its performance by placing the health board in special measures.

Mr Skates said: “As well as discussing my constituents’ concerns about the NHS in North Wales, I will be raising several other matters specific to Clwyd South which I am hoping for positive news on.

“The Llangollen facility will be massive for the town. It’s important we don’t just focus on what is needed now, but continue to build for the medium and long-term too.”

* The surgery has asked llanblogger to display the following notice:


Betsi Cadwaladr University Health Board and Dr A D Evans & Partners are hosting an open afternoon at the new Health Centre situated next to Bishops Walk in Llangollen.  This will be an informal opportunity for people to familiarise themselves with the new building, and find out more about the services that it will offer, before it opens on 24 August.

If you require any further information please contact the Health Centre on 01978 860625.


"The news broke yesterday (Thursday) that Betsi Cadwaladr has decided not to contest the Judicial Review brought about by campaigners fighting the closure of consultant-led maternity services at Ysbyty Glan Clwyd, reported by the BBC at http://www.bbc.co.uk/news/uk-wales-north-east-wales-33367737.
Myself and fellow campaigners are celebrating and welcome the apparent change of heart at the Board. It marks the arrival of the new Chief Executive, Simon Dean and our meeting with him around a week ago, but discussions are on-going between us to ensure this apparent change of attitude at the top is permanent and in future we, the public, will have more say in matters affecting us all, such as bringing beds back to Llangollen, ensuring safe access to the new Health Centre and improved GP availability.
Thanks in particular go to Marsha Davis of the #savebetsibabies campaign and Mabon ap Gwynfor of the North Wales Health Alliance."
Posted by llanblogger at 11:20 AM