Play gives insight into the lives of Llan's Ladies 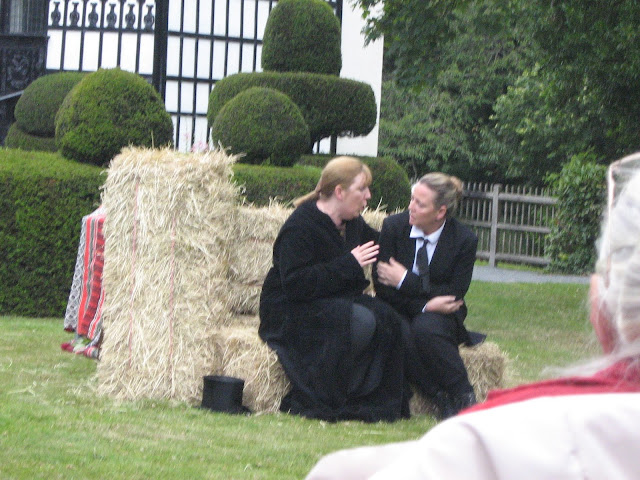 * Caroline Anthonisz, left, and Paula Sutton as Eleanor Butler and Sarah Ponsonby.
A PLAY specially written for the town’s Fringe Festival provides a fascinating and thoughtful insight into the lives of the famous Ladies of Llangollen.
The one-hour drama, penned by Wrexham playwright Peter Read, was given added poignancy as it was performed earlier this evening in the open air within the grounds at Plas Newydd where the couple lived together for over 50 years.


The exact nature of the relationship of Sarah Ponsonby and Lady Elizabeth Butler is central to the piece.
Were they living together as “lovers” in the sense of the term we accept today, or were they simply two women who loved each other for companionship and out of mutual admiration – a meeting of minds rather than bodies?


Thankfully, to help preserve the question mark which has hung over them for the past couple of centuries, the truth of the matter isn’t explored too deeply.
Instead, we see the frantic flight of this aristocratic duo from their native Ireland – where perhaps loveless marriages and a life of strict conventionality awaited them – to the Vale of Llangollen where their idyll was frequently buffeted by a lack of funds, untrustworthy servants and spats with the neighbours.


It is a credit to Peter Read’s dramatic abilities and a talented eight-strong cast that a decent-sized audience got a real flavour of what life was like for this rather odd couple.
Caroline Anthonisz and Paula Sutton were highly believable as Butler and Ponsonby respectively.


The fictitious modern-day couple – a playwright called James and a writer of coffee table books called Anna visiting Plas Newydd for research purposes - whom the author uses a device to tell the tale, are thoughtfully played by Joe Scatley and Megan Wroe.
And there are some neat cameos in various supporting from David Edgar, Andrew Welsh, Lizzie Clifford and John Clifford.


Sarah and Eleanor the Play will be performed again at Plas Newydd tomorrow (Wednesday) at 7pm.
* For tickets, see the Llangollen Fringe website at www.llangollenfringe.co.uk, or get them at the Fringe desk at the entrance to the Town Hall, or at Plas Newydd on the night.

Posted by llanblogger at 8:58 PM