Time again for Llan to meet the world 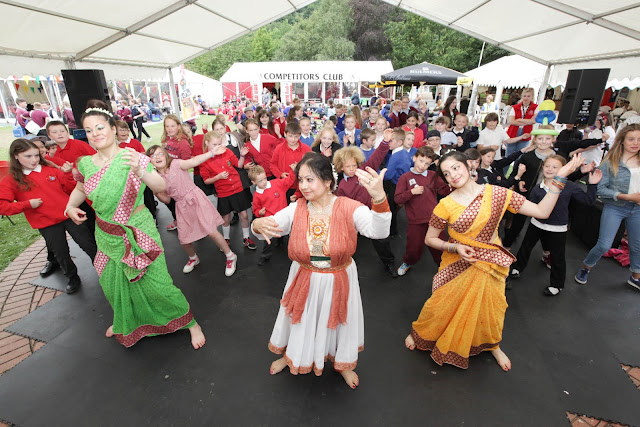 * Bollywood on the Dee – Indian dancers on one of the outside stages.


Thousands of people from around the world - as well as a Royal couple - will descend on Llangollen next week as it celebrates the 69th annual International Musical Eisteddfod.
The visit of the Prince of Wales on Tuesday afternoon, will make this a special occasion as he and the Duchess of Cornwall arrive in time for one of the event highlights, the Parade of Nations.
Prince Charles will be meeting Eisteddfod officials and chatting to competitors taking part in the parade which will again be led by the Eisteddfod’s President, Terry Waite CBE.
It is the fifth visit he has made to the festival, he came with Princess Diana in 1985 and with the Duchess of Cornwall in 2006, and also on his own as a Day President in 1996 and in 2003 to a special concert in aid of the Prince’s Trust.
Over the years the event which began as a festival of peace in the aftermath of the Second World War has grown into one of Europe’s premier music and dance events.
It has attracted cultural icons like Dylan Thomas and the great Italian tenor Luciano Pavarotti, who began his international career as a member of a choir from Modena at Llangollen in 1955.
In recent years artists of the stature of Bryn Terfel, Katherine Jenkins, Kiri Te Kanawa, James Galway, Montserrat Caballe and Jools Holland have performed at the Sunday Evening Gala Concert and last year veteran rockers Status Quo brought the curtain and the house down at the finale.
Most importantly the competitors have continued to come from all over the world – this year they will be here from Canada and China, Ghana, Hungary, India and Indonesia, Jamaica, Morocco, Nepal, Slovakia, Sweden, the Netherlands and the USA as well as from all over the UK and Ireland.
This year’s event runs from Tuesday, July 7, when Prince Charles will see off the colourful traditional procession from the Royal International Pavilion to the town and back, through six days of competitions and concerts to Sunday’s spectacular fireworks extravaganza.
This year the list of concerts is led by legendary American songwriter Burt Bacharach who will perform at the curtain-raiser on Monday night while artists of the stature of Alfie Boe, harpist Catrin Finch, choirmaster Gareth Malone and singer-songriter Rufus Wainwright will take the stage during the evenings.
This year’s closing concert will be performed by Ali Campbell, the voice of multi-selling reggae artists UB40, reunited on stage with former bandmatres Mickey and Astro.
But there will also be so much going on during the day, both on the main stage as competitions take place, and on the field where crowds mingle with performers and competitors in a multi-cultural carnival of nations.
Eisteddfod Musical Director Eilir Owen Griffiths said: “We have another wonderful event to stage this year and with artists of the calibre of Burt Bacharach, Alfie Boe and Gareth Malone the status of the this unique event is underlined.
“The Royal visit just adds to the magic and sense of occasion andf we’re looking forward to another spectacular week this year.”
For more details on this year’s event go to the website at www.international-eisteddfod.co.uk and on Facebook at www.facebook.com/llangollen
Posted by llanblogger at 9:05 AM